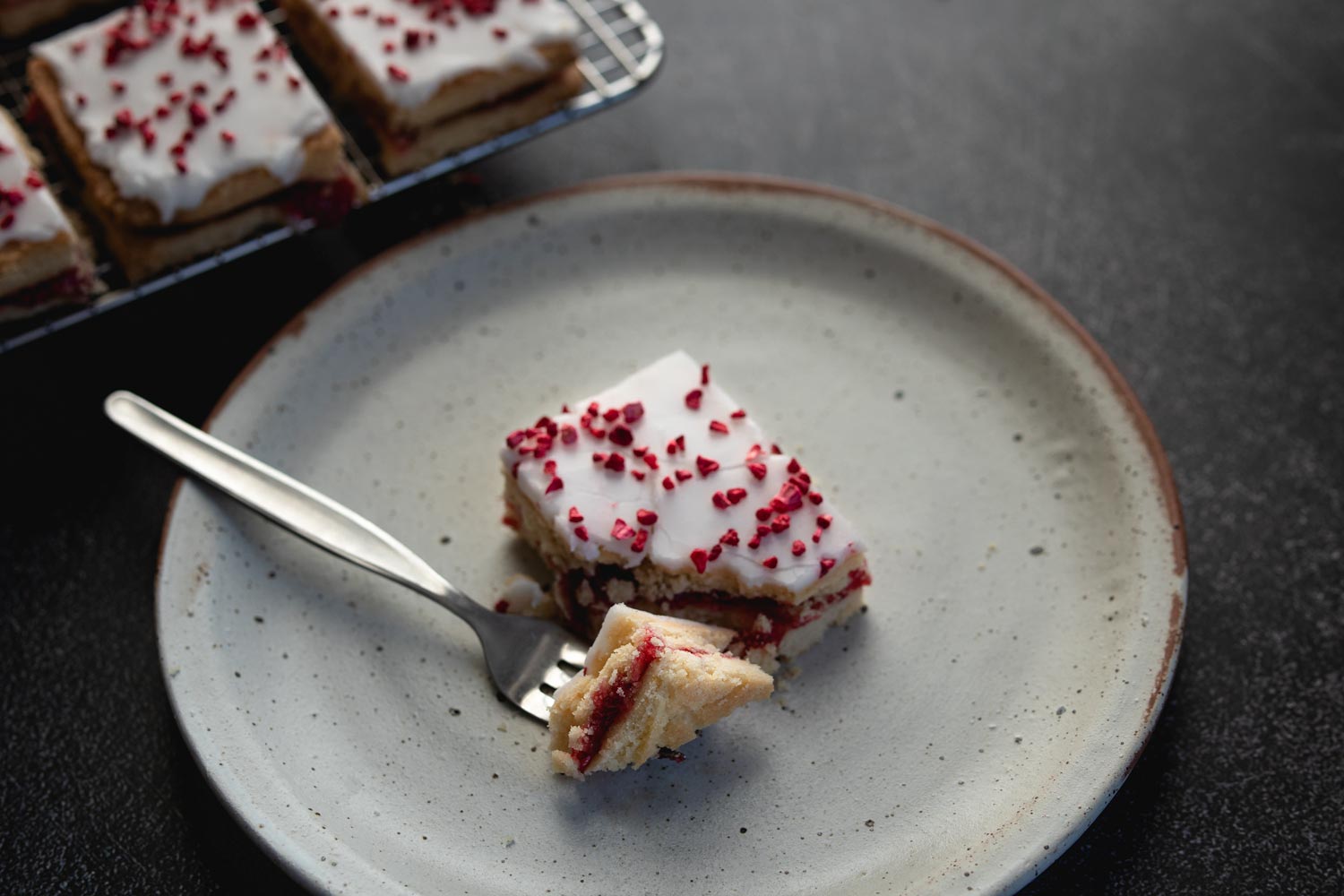 I had a hard time deciding which name to give this recipe. In the end I chose the Danish name because I decorated mine with freeze-dried raspberries, and the Danish version is usually generously adorned with sprinkles. Hindbaersnitter are based on a Latvian pastry called Aleksander kuka made to honor Tsar Alexander III, which is based on a Finnish pastry called Aleksanterinleivokset made to honor Tsar Alexander I. Hindbaersnitter were a also a favorite of Hans Christian Andersen. Regardless of where it originates, the pastry is made with two (sometimes three) layers of buttery, crumbly shortcrust filled with sweet-tart raspberry jam and covered with lemon icing. The Latvian and Finnish versions feather the frosting while the Danish version adds sprinkles.

The Original Alexandertorte and Alexander I

The original Alexandertorte was made in Finland in 1818 to honor Tsar Alexander I, the emperor of the Russian Empire from 1801 to 1825. Alexander I ruled Russia during a period of climactic competition among the various empires in Europe and was a major influence in negotiating Europe’s borders. After an ostentatious victory over Napoleon in 1812, in which the French troops were chased out of Moscow all the way back to Paris, Alexander I enjoyed an influential role in the Congress of Vienna. The Congress was held in 1814 to create a peace plan for Europe after the clashes during the French Revolutionary War and the Napoleonic Wars by restoring boundaries and resizing European powers to maintain balance. During the Congress, the ‘Savior of Europe’ gained the Duchy of Warsaw (now Poland) and was allowed to keep Finland.

Finland was formerly part of Sweden, but lost the territory to the Russian Empire in 1809 in the Finnish War. The territory became the Grand Duchy of Finland and recognized Alexander I as grand duke. For most of Alexander I’s reign, he was relatively liberal and Finland enjoyed many freedoms. Alexander I promised Finland freedom of religion, to pursue their customs and preserve their identity. Later in life, Alexander I became increasingly suspicious and paranoid of those around him and his mental health declined. During a trip to the south of Russia, he contracted typhus and died in 1825.

The next Alexander torte was made for Tsar Alexander III during a visit to Riga. Alexander III was the Emperor of Russia, King of Poland and Grand Duke of Finland from 1881 to 1894. He was nicknamed “the Peacemaker,” but more for the lack of war during his reign rather than his policies. He was the nationalist and gruff grand-nephew to Alexander I. Alexander III opposed representative governments and enforced Russification of the non-Russian speaking territories of the Empire, including Finland, Poland and the Baltics.

While this is a simple recipe: shortcrust, jam and icing, it does take a bit of time. I’ve included my favorite recipe for raspberry jam, but you could use your preferred store-bought jam to save some time. Because the jam and the bars take some time to make, you should begin two days before you’re planning to serve them (see sample schedule below). Allowing the bars to rest overnight after assembling and icing them gives the icing time to harden and makes the slices neater. If you’re rushed, you could slice the same day after resting a few hours, but the pastry will be more crumbly and the edges won’t be as sharp.

Day 1: Macerate the raspberries for the jam
Day 2: Finish the jam, make the pastry and assemble the bars
Day 3: Slice and serve

Tips for Working with Shortcrust

Shortcrust is notoriously difficult to work with, as it’s delicate and temperature sensitive. Throughout the whole process be sure to handle it gently. There are a few tricks to make it a little bit easier.

When mixing, make sure the ingredients are at room temperature. If the butter is too cold, then you will whip too much air into the butter by the time it is softened and the pastry will puff up when baked.

For each mixing step, only mix until just combined. If you overmix the dough, the gluten will develop leading to a tough pastry that shrinks when baked.

Chill the dough after mixing. This helps hydrate the flour, relax the gluten, and cool the butter enough to make the dough easier to roll.

Before rolling out the dough, knead the dough a bit with your hands until it is smooth. This helps to minimize cracks around the edges while rolling and prevents breakage while shaping.

And lastly, don’t worry too much if the pastry breaks or cracks; if you haven’t baked it you can patch it back together, and after baking you can cover it with jam and icing.

The jam makes about twice as much as you need for the bars. You won’t regret having extra. The jam can be kept for several days in the fridge, or frozen.

Place the raspberries and 100g (1/2 cup) sugar in a bowl and mix together. Cover the bowl and refrigerate for 1 hour.

Bring the macerated raspberries to boil in a small saucepan over medium heat while stirring with a spatula.

Pour the mixture back into the bowl and cover. Allow it to cool, then refrigerate overnight.

The next day, pour the mixture into a small saucepan and bring it to a boil over medium heat while stirring with a spatula.

Boil until thickened, about 5 – 10 minutes. While the jam boils, use a spoon to skim off the foam that rises to the surface.

Once it has thickened, pour the jam into a heatproof container and cover. Leave to cool to room temperature, and then place in the refrigerator until ready to use. It will also set more when it cools.

In the bowl of a stand mixer with the paddle attachment, or in a large bowl with a rubber spatula, place the butter, sugar, egg yolk and vanilla extract. Mix just until combined.

Add the flour and salt to the butter mixture and mix just until the dough comes together.

Shape the dough into a rectangle, wrap in plastic and rest in the refrigerator until the dough is firm enough to work with, about 30 minutes.

Unwrap the dough and split into two equal pieces. Work with one piece at a time and leave the second piece in the fridge while rolling out the first.

Knead the dough a bit with your hands until it is smooth. This will help minimize cracking and prevent the dough breaking while working with it.

Lightly dust your work surface with flour and roll the dough into a 20-cm x 20-cm (8-inch x 8-inch) square. Use your hands or a dough scraper the push in the sides and sharpen the corners as you go.

Very carefully transfer the square of pastry to a parchment lined baking sheet and rest it in the fridge while working with the second piece.

Repeat with the other piece of dough.

Bake the short dough in the oven at 175°C (350°F) for about 15 minutes, just until the dough turns a pale golden color. Allow the pastry to cool completely before assembling.

Note: If you don’t have enough room to bake both pastry squares, bake them one at a time and leave the other dough square to rest in the fridge meanwhile.

If desired, trim the edges of the pastry with a long sharp knife to square them off.

Spread about 1/2 cup (just over 1dl) of jam on one of the pastry squares.

Top with the second pastry square upside down so the flat surface is on top.

Sift the icing sugar into a medium bowl. Stir in the 2 tablespoons of lemon juice using a whisk. Whisk in the water 1 tablespoon at a time until it reaches the desired consistency. It should be pretty thick.

Spread a thin layer of icing over the top. You may not need all of the icing. To get a smooth surface, heat an offset spatula in hot water and wipe dry before spreading. Every few strokes, wipe the spatula clean and reheat until the icing is spread evenly and smoothly to the edges.

2. Decorate with sprinkles or freeze-dried raspberries:

If using, decorate with sprinkles or freeze-dried raspberries.

Alternatively, you could dye some of the icing pink, pipe stripes across the white icing and use a toothpick to feather the icing.

Place the pastry in the refrigerator overnight for the icing to harden. The pastry will also be easier to slice the next day.

The next day, slice the pastry into 12 bars. Use a long, sharp knife and use the same technique as with the icing: heat the knife in hot water and wipe dry before making a cut. Wipe the knife clean and reheat before the next cut, repeating until you have 12 bars.

Any cookies that may not be particularly necessary for the website to function and is used specifically to collect user personal data via analytics, ads, other embedded contents are termed as non-necessary cookies. It is mandatory to procure user consent prior to running these cookies on your website.