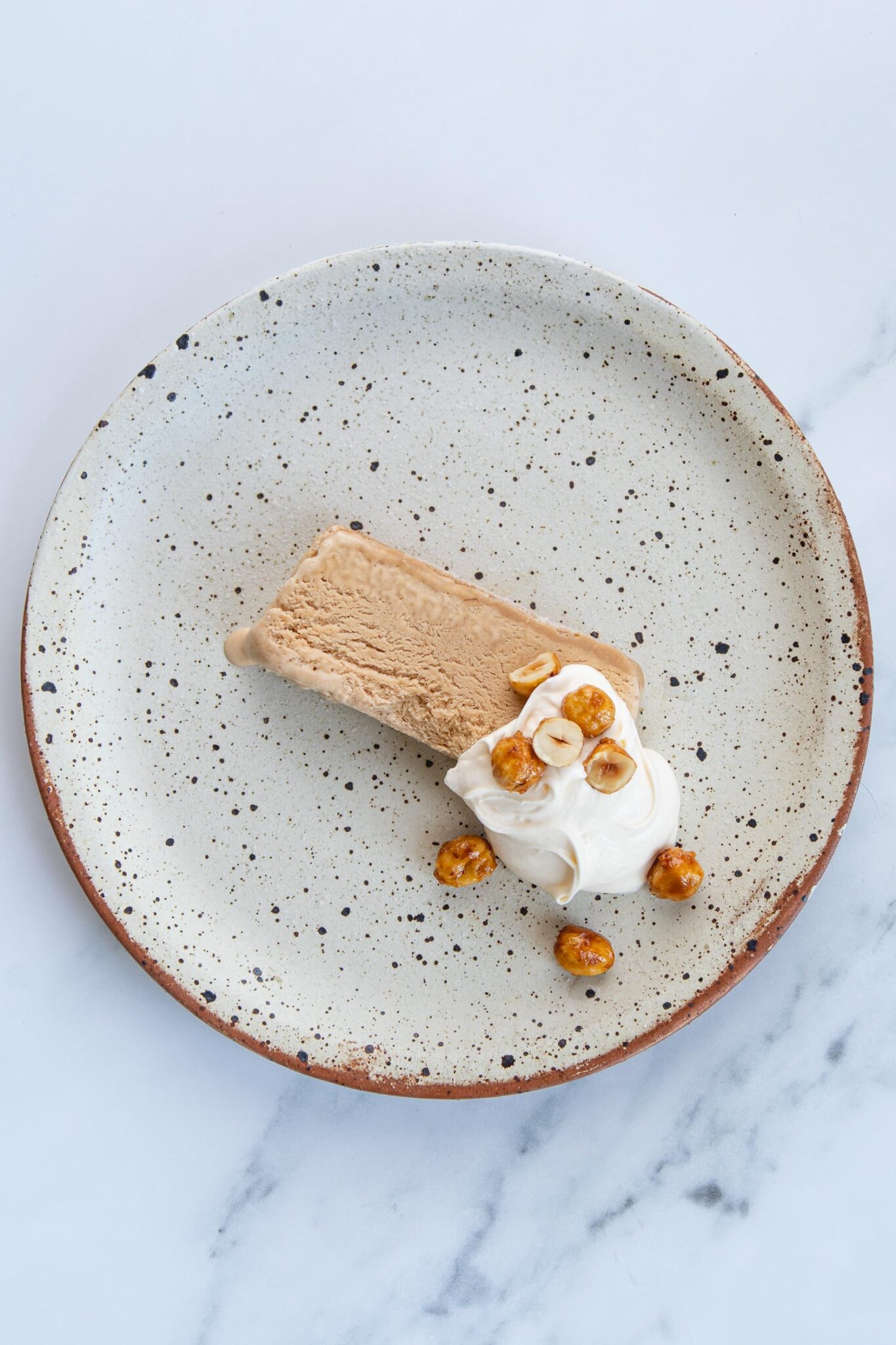 Semifreddo, meaning “half-frozen,” is the Italian response to the French parfait. It’s a frozen dessert similar to ice cream, but molded and sliced instead of scooped. It’s traditionally made with Italian meringue and whipped cream, and can be flavored almost any way you want. Because semifreddo doesn’t require an ice cream machine or a blast chiller, it’s a perfect frozen dessert to make at home when it’s too hot to turn on the oven.

How is semifreddo different from ice cream or gelato?

My first restaurant job was at an Italian restaurant called Caiola’s and one of the staples on the dessert menu was semifreddo. The flavor changed at least weekly depending on the season and also at the whim of the chef, Abby. I also worked at a gelato shop, freezing and creating the decorative patterns for dozens of trays of gelato each shift. So, I learned a lot about frozen desserts.

So what’s the difference between ice cream, gelato and semifreddo?

To make enjoyable frozen desserts, you have to control the formation of ice crystals. Ice crystals affect and ultimately dictate the texture of frozen desserts, with smaller ice crystals creating a smoother, creamier texture. Their formation can be controlled by adjusting the amount of sugar, fat, air and alcohol in the mixture. This is where the main difference lies between ice cream, gelato and semifreddo: the methods they use to control the formation of ice crystals during mixing and freezing.

Ice cream is made with milk, cream, sugar and usually eggs or egg yolks. The mixture is cooked to make a custard, and then churned to incorporate air while freezing. Ice cream has a high fat content, and the fat helps trap air. The air makes ice cream light and the fat makes it creamy.

Gelato has more milk and less cream than ice cream and usually has less egg or no eggs at all. Gelato is churned slower, incorporating less air into the mixture. It’s also served at a warmer temperature, which keeps it smooth and silky. Gelato has less fat and more sugar than ice cream. While fat increases richness, a lot of fat will coat the tongue and mellow out flavors. Gelato is all about flavor as it’s denser and more concentrated than ice cream. For example, strawberry gelato will have a more intense strawberry flavor than strawberry ice cream.

Semifreddo is made with Italian meringue. The whipped eggs are then mixed with whipped cream and then frozen. As opposed to ice cream or gelato, air is incorporated into a semifreddo from whipping the eggs and the cream, rather than churning after cooking a custard. Semifreddo is normally sliced rather than scooped, but it’s still creamy with a consistency similar to frozen mousse.

What’s the difference between semifreddo and parfait?

Wait, but what about parfait?

The French invented parfait at the end of the 19th century. It’s also a frozen dessert made with cream, eggs and sugar. Parfait, like semifreddo, isn’t churned. It’s made by hand and frozen in a mold, also like semifreddo. Then what’s the difference?

Now, almost 150 years later, you don’t always find this difference between the two. Sometimes parfaits are made with meringue, sometimes semifreddo is made with egg yolk, and sometimes either of them are made with whole eggs.

Before machine mixers were widely used, egg whites and yolks were separated for whipping because individually they had a higher foaming ability than when left whole. But combining the warm foaming method with the power of an electric mixer, you can still get a lot of volume from whole eggs. By heating the eggs, the proteins begin to coagulate, increasing their stability and the ability to foam when whipped in an electric mixer.

Lightly grease a loaf pan with oil and line with plastic wrap.

In the bowl of a stand mixer fitted with the whisk attachment, or by hand in a large bowl with a whisk, whip the cream until thick. Stop before the cream develops stiff peaks.

In a small dish, stir together the espresso powder and coffee liqueur to dissolve the espresso powder. Pour the coffee mixture into the cream and continue to whip until the cream develops stiff peaks. Be careful not to overwhip, or it will become grainy. Reserve the whipped cream in the refrigerator.

Fill a small saucepan with about an inch (2.5cm) of water and set on the stove on medium heat.

In the bowl of a stand mixer, combine the eggs, sugar and salt. Place the bowl over the pot of water on the stove, making sure the bottom of the bowl doesn’t touch the water.

Cook the egg mixture over the bain-marie until it reaches 74°C (165°F). This will take about 10 minutes in a stainless steel bowl, and about 15 minutes in a glass bowl. Stir the mixture constantly with a whisk or a rubber spatula, to prevent scrambling the eggs.

When the eggs reach 74°C, transfer the bowl to the stand mixer fitted with the whisk attachment. Whip on high until it the mixture becomes thick, foamy and quadruples in volume, about 5-8 minutes. You should be able to use the whisk to draw a figure-eight in the batter.

Fold in the whipped cream:

Transfer the mixture to the prepared loaf pan and cover well with plastic. Place in the freezer until firm, about 8 hours, or ideally overnight.

Once the semifreddo is frozen, carefully remove from the tin, slice and serve.