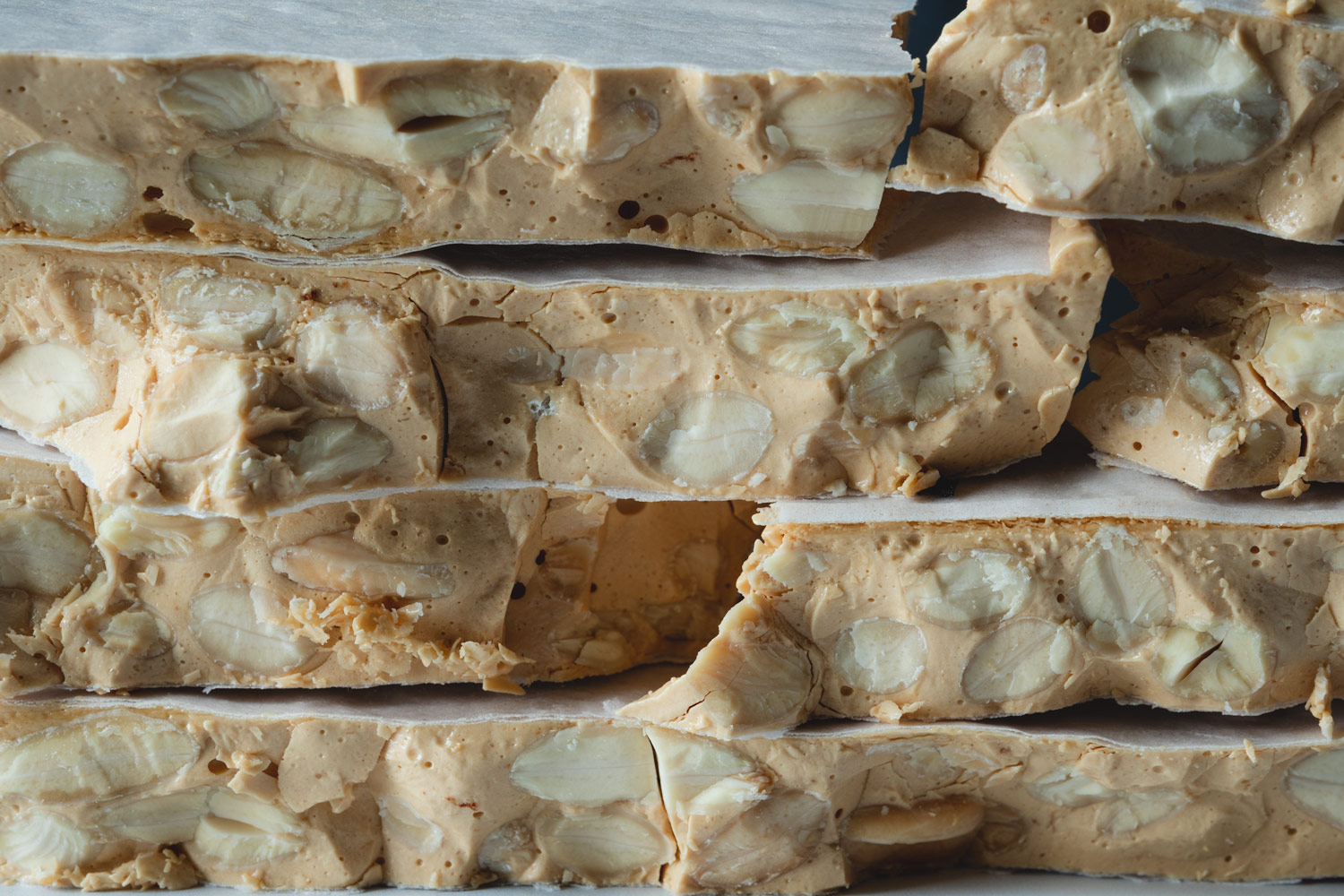 Some links may be affiliate links. We may get paid if you buy something or take an action after clicking one of these.

Turrón is Spanish nougat that’s a popular Christmas candy. As soon as the holiday season begins, you start to see turrón everywhere. It comes in hundreds of varieties and flavors, but the classic is made with almonds. This recipe for turrón de Alicante is loaded with toasted almonds and caramel-honey flavor.

What is Turrón Made From?

Generally, turrón is made from honey, sugar, egg white, and almonds. Nowadays there are hundreds of varieties of turrón.

It can be flavored with hazelnuts, pine nuts, chocolate, or unconventional flavors like crema Catalana or even cheese and nut. But, the two classics are turrón de Alicante and turrón de Jijona.

How to Make Turrón

To make turrón, a hot syrup made from the honey and sugar is whipped into beaten egg whites, similar to making meringue. The mixture is then cooked further on the stove until it becomes hard and breakable when cooled. The almonds are stirred in before transferring to a mold to cool.

While both turrón de Alicante and turrón de Jijona are made from the same ingredients, they couldn’t be more different.

Turrón de Jijona is soft and chewy. The almonds are ground to a paste before they’re stirred into the honey and egg whites. The oil released from grinding the nuts keeps the nougat soft.

Turrón de Alicante is made with toasted whole almonds, so the oil from the nuts aren’t mixed into the nougat, keeping it crunchy and brittle.

The History of Turrón

Turrón has been made in the Valencia region of Spain since at least the early 15th century. The recipe most likely arrived in Europe through Al-Andalus, as white nougat recipes were popular in the Arab world and show up in a 10th century cookbook from Baghdad.

Turrón spread to other regions of Spain and was first published in Spanish in the 16th century cookbook, Manual de Mujeres.

Nougat also spread outside of Spain. France and Italy have their own versions: Nougat de Montélimar in France and torrone in Italy.

While it’s easy to find authentic Spanish turrón, with a bit of patience, you can make it at home as well.

Keep the almonds warm in the turned off oven with the door ajar.

Lightly grease a rubber spatula with oil and have it at the ready by the mold.

In a medium saucepan, combine the honey and the sugar. Set the pan over medium heat and cook until it reaches 115°C (240°F). Meanwhile, beat the egg white.

Beat the egg white to soft peaks in the bowl of a stand mixer with the whisk attachment.

When the honey syrup has reached 115°C (240°F) and the egg white has formed soft peaks, slowly pour the hot syrup into the egg white with the mixer running.

At this point, the nougat should be bright white and shiny. Transfer the nougat back into the saucepan.

Put the saucepan over low heat and cook the nougat, stirring constantly with a rubber spatula (not the greased one from earlier).

You can test the nougat for doneness by spooning a small amount into a cup of cold water. If the nougat hardens and becomes brittle, it’s done. It will take about 30 minutes.

Stir in the almonds:

Take the nougat off the heat and stir in the warm almonds, distributing them evenly.

Pour into the mold:

Pour the almond nougat into the mold. Now switch to the greased spatula to spread the nougat to the edges of the mold and press it down.

Top the nougat with the other piece of wafer paper, shiny side up. Use your hands or a flat-bottomed, heavy object to gently press down and flatten the nougat. Don’t use too much pressure, as the wafer paper tears easily.

Let the nougat cool and harden for at least 2 hours, or overnight. Then peel back the plastic wrap, slice, and serve.

To slice hard nougat, use a sturdy knife and something to hammer with. I tapped the spine of my knife with a rolling pin to crack the turrón. (If you have an expensive, delicate Japanese knife, I would not use it for this task. I have a German chef’s knife from Wüsthof and I’m not too afraid of hurting it.)

Store the nougat in an airtight container. Keep away from humidity and don’t store it in the refrigerator so it doesn’t soften.

the Sunday Baker is a participant in the Amazon Services LLC Associates Program, an affiliate advertising program designed to provide a means for sites to earn advertising fees by advertising and linking to Amazon.com.