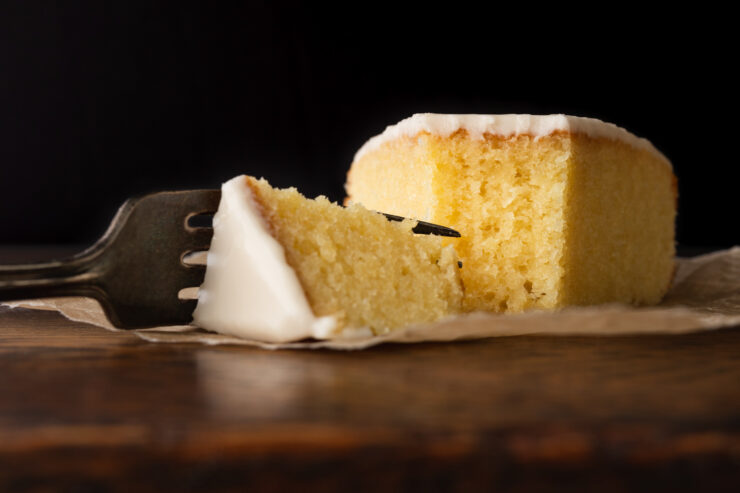 Gateau Nantais is a dense almond pound cake imbibed with dark rum and topped with a thin glaze. The rich cake with its delicate sheet of royal icing may look stately, but each bite is a spirited celebration of Caribbean dark rum.

The History of Gateau Nantais

Gateau Nantais is a specialty of Nantes, the largest city in Pays de la Loire in western France. Though, the amount of butter in this cake might give away Nantes’ historical allegiance to Brittany.

In the 17th century, ingredients from the French Antilles such as sugar cane, rum, and vanilla were imported to mainland France through the port of Nantes. Because of a French block on the import of Spanish sugar, the sugar industry took off in Nantes and by the mid 1700s there were more than 15 sugar refineries in the city.

Gateau Nantais was likely invented in the early 1800s and combined many of these luxury ingredients imported from the colonies. The cake was served by housewives as an ostentatious treat for their guests.

The cake was nearly forgotten about until the biscuit company, LU, began to manufacture and sell gateau Nantais during most of the 20th century. Since then, gateau Nantais has seen a revival and is again a classic of the city.

How to Make Gateau Nantais

First, the butter and sugar are creamed together until light and fluffy. This recipe calls for unsalted butter and adds salt. But if you have access to high quality French salted butter (ideally from Bretagne), then that is a must and skip the salt.

Then the flour, baking powder, and salt are folded into the batter just until combined.

Finally, the rum and vanilla extract are blended in before transferring into a greased cake pan and baking.

While the cake cools, make the rum glaze by mixing water, a tablespoon of rum, and sifted powdered sugar. The cake is coated with a thin layer of the glaze and allowed to set.

Because of how rich this cake is, thin wedges are served. But you can always sneak another slice.

2. Whisk together the flour, baking powder, and salt:

Whisk together the flour, baking powder, and salt in a mixing bowl and set aside.

3. Cream the butter and sugar:

Beat together the butter and sugar with an electric mixer on medium-high speed, about 2 minutes, or until light and fluffy.

Add the almond meal and mix on medium until fully combined.

Add the eggs, one at a time, beating well after each addition.

Add the flour mixture and mix on low speed just until incorporated.

Pour in the rum and vanilla extract and mix until combined.

Transfer the batter into the prepared pan and bake for 35 to 40 minutes, or until a skewer inserted in the center of the cake comes out clean.

Allow the cake to cool completely before icing.

Sift the confectioners’ sugar into a medium bowl. Pour in the rum and water and whisk until very smooth. It should have a thick but pourable consistency, like royal icing. Thin with more water if needed.

Pour the glaze over the top of the cake and spread evenly.