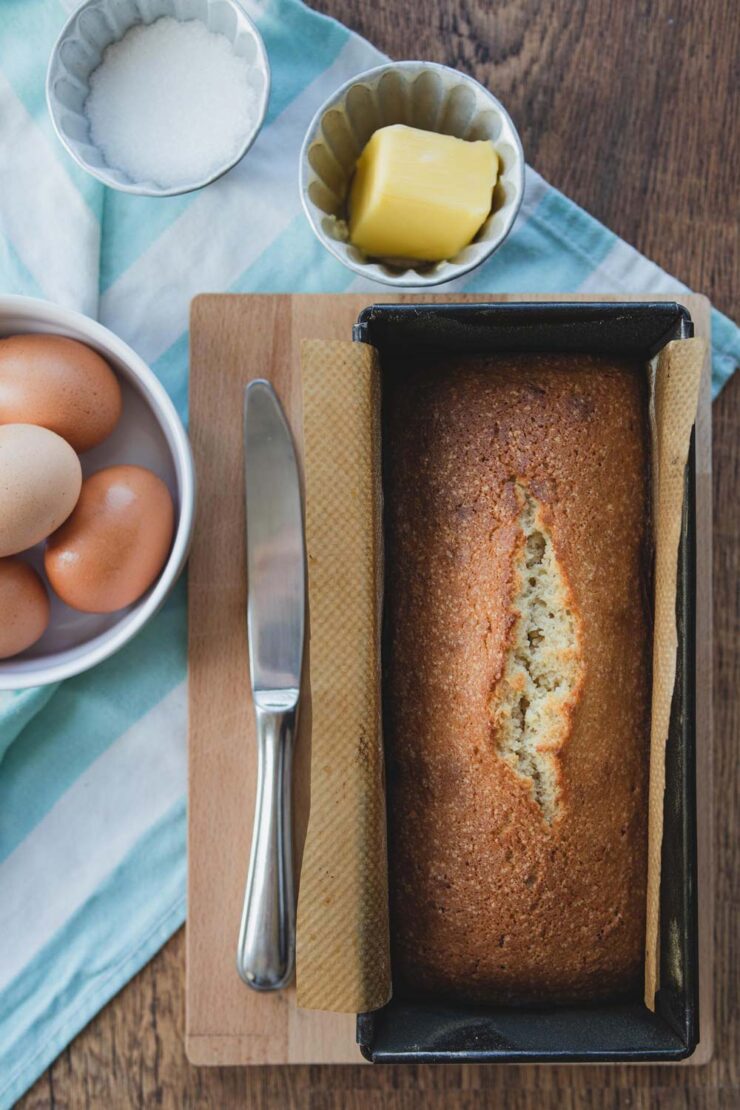 Quatre-quarts, meaning four quarters, is a French pound cake from Brittany so named for the equal proportions of four ingredients: butter, sugar, eggs and flour. This recipe has a simple formula and won’t leave you searching for exotic or hard to find ingredients. It is technique-focused, so do take your time in each step. Traditionally, quatre-quarts is made plain without extra flavorings. Without the chemical leavener, the flavor of the ingredients really comes through. Some versions of the cake add rum, and in mine below, I’ve included vanilla extract.

The History of Pound Cake

The pound cake was first created in England in the 1600s. Before that, cakes were leavened with yeast and were closer to sweet breads, like Gugelhupf or Panettone. The early pound cakes were elaborately flavored with fruits, nuts and spices, similar to fruitcakes today. By the 1700s, plain pound cakes came into fashion. With the invention of baking powder in the 1800s, the Victoria Sponge evolved from the pound cake.

Since pound cakes pre-date the invention of baking powder, they rely on trapping air in the batter for leavening. In quatre-quarts, the egg whites are whipped to stiff peaks separately, and then folded gently into the other ingredients. While baking, the air trapped in the batter expands and causes the cake to rise. This is what can make baking a pound cake difficult; first incorporating air and then gently combining the batter without deflating the air you’ve worked hard to capture.

This recipe is a great base to expand from and is easy to scale and flavor to your taste. The recipe scales based on the eggs. First weigh your eggs (in the shells), then use the same weight of flour, butter and sugar. This recipe is suitable for a smaller loaf pan, but if you have a larger pan, use four eggs and adjust the weight.

You can make it plain, or change the flavorings. You could try rum, vanilla or citrus zest. You could cover the cake with almonds, jam, glaze, icing or fruit. The beauty of a simple recipe is how easy it is to make it your own.

Melt the butter in a bain-marie or in a bowl in the microwave. Set aside and let cool while preparing the other ingredients.

Separate the yolks from the egg whites.

In a large bowl, beat the egg yolks, sugar and salt until the mixture becomes pale and light.

6. Add the butter and vanilla:

Pour the melted butter and the vanilla extract into the yolk mixture and gently fold in with a rubber spatula until combined.

Add the flour to the yolk mixture, again folding gently just until combined. Set aside while preparing the egg whites.

In the bowl of a stand mixer, or a large bowl with a hand mixer, beat the egg whites until stiff peaks form, about 5 minutes. Start testing after 2-3 minutes to be careful not to over-beat. You know the mixture is done when a peak holds on the whisk when held up. If you over-beat the whites, the stretched proteins break and let water out, resulting in a bowl of watery liquid and foam.

Pour the batter into the prepared pan and bake at 180°C for 45-55 minutes. The cake is done when a toothpick inserted in the middle comes out clean.

Cool for at least 20 minutes before removing from the tin and let cool completely before slicing and serving.