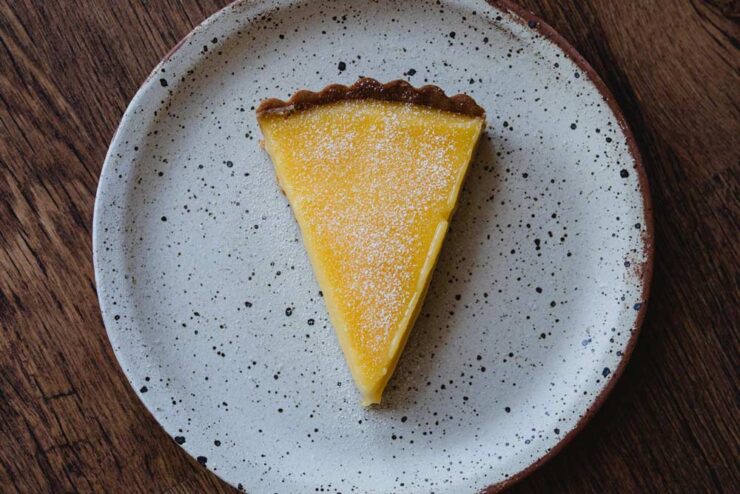 Tarte au citron is a classic of French cuisine. You can find lemon tarts everywhere in France, from the elegantly designed displays of elite pâtisseries to humble bistros, as well as in the home. Tarte au citron can be dressed for any occasion: topped with whipped cream or fruit, decorated with Italian meringue and toasted in the broiler (meringuée), or simply dusted with confectioner’s sugar (nature). However you serve it, it’s a bright, zesty tart sure to add some zing to your day.

The History of Tarte au Citron

Ubiquitous across France today, the history of tarte au citron is much harder to find. Lemons were introduced to the Roman Empire during the second century AD. Lemons were also widely cultivated in the Arab world and were brought to Europe through Al-Andalus, the name of the Iberian peninsula under muslim rule from 711-1492. This helps explain the two roots for the word lemon in various European languages; citron being based on Latin origins and lemon from the Arabic limun. During the Age of Exploration, the Spanish brought lemon seeds to the Americas. In addition to geographical expansion, lemon’s culinary uses also expanded when it was discovered by James Lind in the mid-1700s that lemon could help seamen suffering from scurvy.

Fruit curds are credited to England in the 19th century. The original lemon curd was much different from what we have today. The acid in lemon juice was used to form curds in cream and then separated from the whey in a cheesecloth, hence an alternative name, fruit cheese. Modern lemon curd probably evolved from “transparent pudding” in the Victorian era, essentially a custard of thickened butter, sugar and eggs. Lemon curd became a popular alternative to jam to spread on toast or scones.

Tarte au citron’s popularity in France also begins in the 19th century. This is when the tart dessert began to proliferate pâtisseries and restaurants all around France. And now let’s examine a quote I found on nearly every recipe for French lemon tart: “La tarte au citron était servie au roi au début du XIXe siècle. Elle était symbole de richesse et de bonté.” Or, “Lemon tart was so revered that it was served to the king at the start of the 19th century as a symbol of wealth and goodness.” But let’s consider this quote in the context of France’s history: the French Revolution.

The 19th century was a complicated time for government in France. The French Revolution began in 1789 and ended in 1799, establishing the First Republic which lasted from 1792 to 1804. Not to mention, it would have been impossible for Louis XVI to enjoy a slice of tarte au citron as he was beheaded in 1793. The First Republic was succeeded by the First Empire under Napoleon. Following Napoleon I, King Louis XVIII briefly ruled France from 1814 to 1824. So, it is possible that the quote refers to King Louis XVIII, convincingly nicknamed le Désiré, the Desired. Though I have not been able to find any source for the quote or story about King Louis XVIII being served tarte au citron. If you happen to know, or find it, please let me know in the comments.

How to Make Tarte au Citron

1. Combine the butter and sugar:

In the bowl of a stand mixer with the paddle attachment, or in a large bowl with a rubber spatula, combine the butter and confectioners’ sugar and mix until smooth.

Try to work quickly to prevent the dough from becoming warm. As it warms up it sticks easier and can become hard to work with.

Unwrap the dough, dust it with flour, and place it on a lightly floured surface. Roll to 1/8 inch (3-4mm) thick, rolling from the center outward in all directions. Lift and rotate a bit after every few strokes and dust with flour as needed to discourage sticking.

Carefully transfer the dough into the tart pan. Gently press the dough into place without stretching the dough or the sides will shrink while it bakes. Roll the rolling pin over the top to trim the edges. Prick the base all over with a fork and place in the refrigerator or freezer for 30 minutes.

Line the tart shell with parchment and fill with pie weights, beans or rice. Bake for 18-20 minutes for a partially baked shell.

Remove the parchment and pie weights and bake for a further 6-7 minutes for a fully baked shell. The pastry should be golden brown.

If the filling for tart is a wet filling, you may want to brush with an egg wash to seal the shell. This will help to keep the crust crisp longer. A couple minutes before the shell reaches the desired color, brush the base and sides of the shell with beaten egg before returning to the oven until golden and the glaze has set.

You’ll need a large, heat-proof bowl and a pan filled with water. The bowl should fit the pan such that it can be placed without touching the water inside the pan.

In the large heat-proof bowl, combine the sugar and lemon zest. Using your fingers, rub the zest into the sugar, infusing the sugar with the oils from the lemon zest.

4. Whisk in eggs and lemon juice:

Whisk in the eggs, egg yolks and lemon juice and set the bowl over a pot of simmering hot water.

With the lemon mixture in the bain-marie, stir in the butter until it melts.

Keep whisking the mixture until it thickens and it holds its shape when you lift some of it with the whisk. This will take about 10 minutes. If you have a cooking thermometer, the lemon curd is cooked when it reaches 75°C (170°F). Try not to heat it past 80°C (175°F) or it might curdle. Once it’s thickened, pass it through a fine-mesh sieve if you want the filling to be extra smooth.