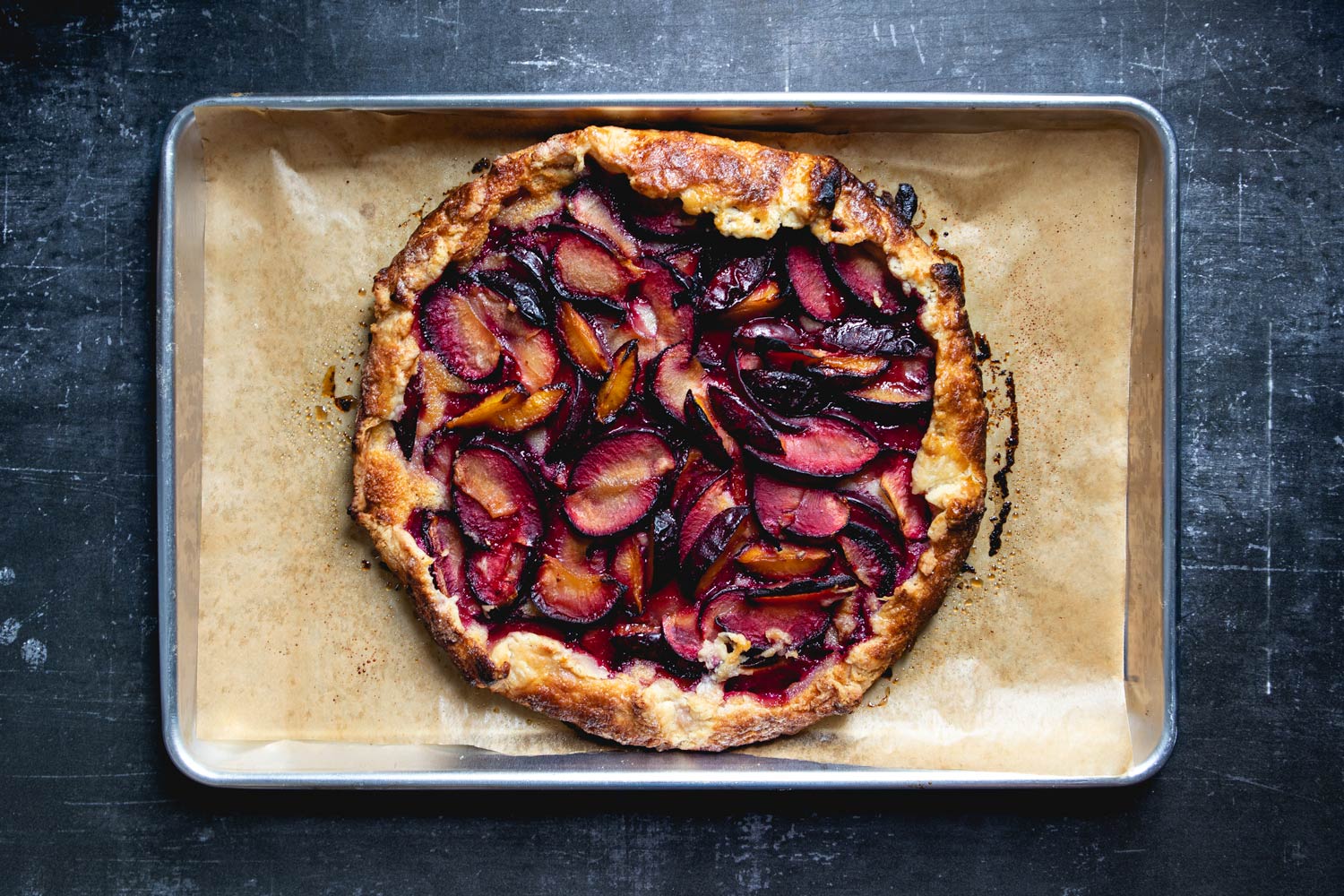 I just got to Maine to visit my family for a while, and in Maine, August is a month to celebrate the ephemeral. Everything seems to be at its brightest. The flowers are in bloom, the fruit has ripened, and we have long days of cloudless sun. It’s time to take advantage of what’s on offer before it passes you by and the snow starts falling.

When fruit is at its freshest, you don’t need to mask its flavor. It’s okay to complement it, but whatever you do, don’t muddle it. I tend to turn to the unassuming galette. A galette is a rustic tart, made from pâte brisée, or pie dough. It’s a free-form tart, that to shape you simply fold up the edges over the filling. It couldn’t be easier.

To take full advantage of the ripe plums and blooming flowers, I decided to make a plum galette with almond frangipane and lavender. Lavender pairs really well with fruit, especially stone-fruits and berries. The almond frangipane adds a creamy texture on top of the crisp crust and the soft fruit, and a mild almond flavor that’s a natural companion to stone-fruits.

In a large bowl, whisk together the flour, sugar and salt.

Pour in the water and vinegar:

Pour in the cold water and vinegar, stirring with a fork until the dough comes together into a ball.

Divide the dough in two and shape into disks. Wrap each disk in plastic wrap, and let rest in the refrigerator for at least an hour before rolling it out. I prefer to make the dough the day before and let it rest overnight.

In a small bowl, sift together the almond flour and icing sugar.

In a medium bowl with a rubber spatula, combine the butter and vanilla extract.

Gradually add the egg white and continue to mix until it is incorporated. Save the egg yolk for the egg wash later.

Cover and refrigerate until ready to use.

Working with one piece of dough at a time, retrieve the dough from the fridge, remove the plastic, and dust both sides of the dough with flour.

Dust a work surface lightly with flour and using a rolling pin, roll the dough out to a 15-inch (40cm) circle, working from the center outwards.

Repeat with the other disk of dough, then return the dough to the refrigerator while preparing the plum filling.

Pit and slice the plums:

Pit and slice the plums thinly. I don’t usually bother to peel them. Place the plum slices in a large bowl.

Add the lemon juice and zest:

Stir in the lemon juice and zest to evenly coat the plum slices.

In a small bowl whisk together the sugar, cornstarch and lavender.

Mix the dry ingredients into the plum mixture:

Add the dry ingredients to the plums and stir until evenly distributed.

Spread the frangipane on the dough:

Divide the frangipane evenly between the two pieces of dough. Spread into a thin layer, leaving about an inch and a half (4cm) border around the edges.

Top with the plum filling:

Spread half of the plum filling evenly over the frangipane in each galette.

Fold up the edges:

Gently fold up the edges of the crust over the plums, overlapping every couple inches to create a decorative border.

In a small bowl, mix the egg yolk with a couple teaspoons of milk. Brush the dough with the egg wash using a pastry brush, and sprinkle with granulated sugar.

Bake the galettes for about 45 minutes, until the crust is a deep golden brown.

If your oven is small, you can bake the galettes one at a time. Be sure to put the second one in the refrigerator until it’s ready for the oven.

Let them cool slightly and serve warm or at room temperature.