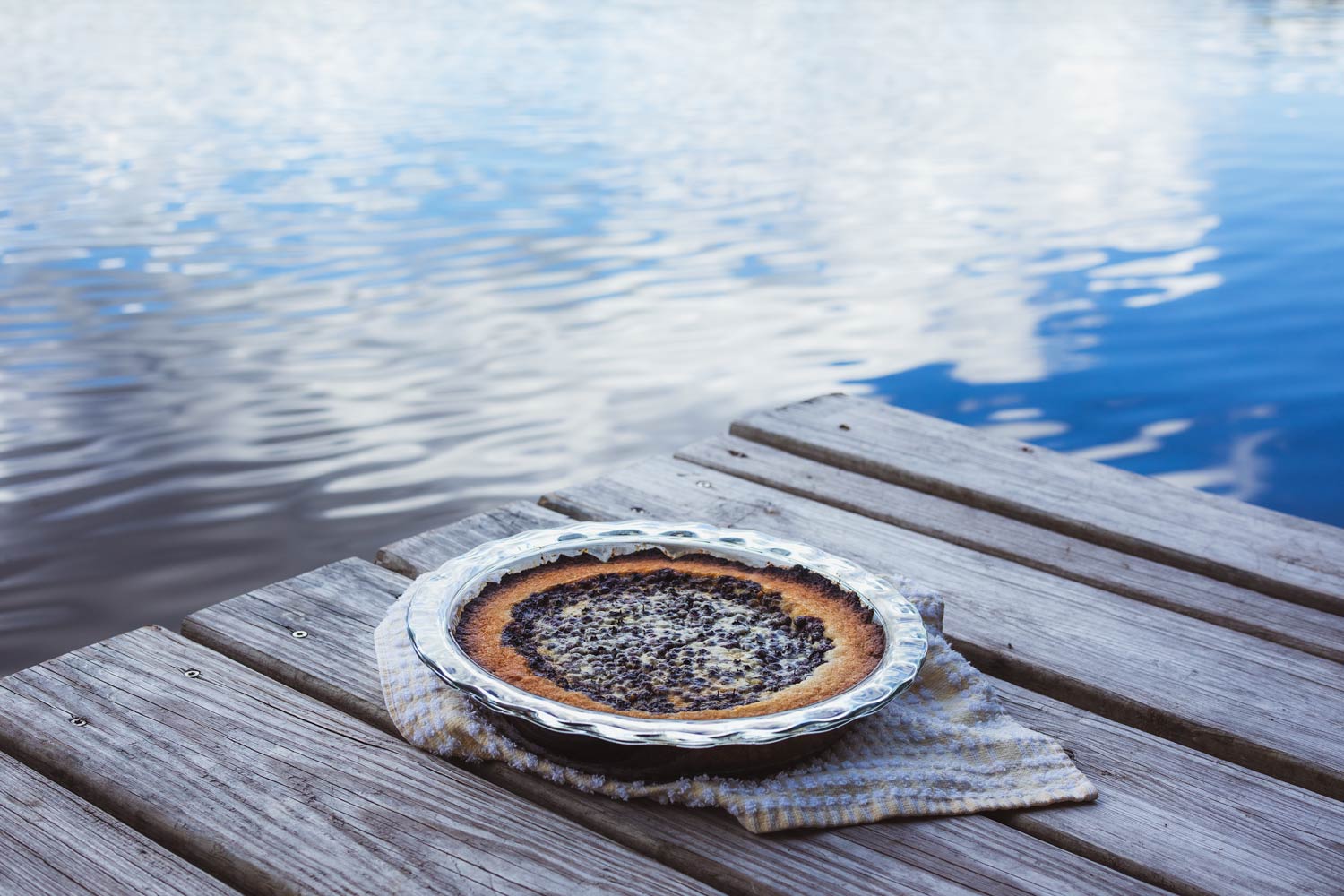 The short Finnish summer produces bilberries, a small dark berry related to and very similar to wild North American blueberries. Bilberries are much more flavorful and aromatic than cultivated blueberries, but because they’re softer, they’re harder to transport. Because they’re so delicate, they’re not usually found in stores. Traditionally, mustikkapiirakka is made with fresh wild bilberries, but a good substitute would be frozen bilberries, or fresh or frozen wild blueberries. The large cultivated blueberries may be used as a last resort, but they’re watery and less flavorsome.

I’m spending some time with my family in Maine, and I arrived in time for the tail-end of the Maine blueberry season and had to try this tart. My parents own a summer cabin on a lake, a “camp” as Mainers would call it, and as a kid I would help my parents pick blueberries from the bushes along the shore. Hours later, the blueberries would be served in homemade blueberry pie after dinner with a scoop of vanilla ice cream.

So, I packed my kitchen tools and headed up to camp to gather some blueberries, make mustikkapiirakka, and retreat to the Maine woods for a couple days. Unfortunately, I was late to the party and the blueberries were gone. They are also popular among the deer, foxes, raccoons, and birds. But, I was able to get a quart of Maine blueberries from the store.

Grease an 10-inch pie or tart pan with butter and dust with flour.

In a medium bowl, whisk together the flour, baking powder and salt.

In the bowl of a stand mixer with the paddle attachment, or in a large bowl with a whisk, cream together the butter and sugar until light and fluffy.

Add the egg and vanilla:

Add the eggs and vanilla and beat until fully incorporated.

With the mixer on low, or by hand with a silicone spatula, gradually fold in the dry ingredients and mix until combined.

Press the dough into the pie tin:

Press the shortcrust dough into the greased pie dish and up the sides.

Whisk together the filling ingredients:

In a large bowl, whisk together the crème fraîche, egg, sugar and vanilla.

Pour the filling into the crust:

Pour the crème fraîche filling into the crust.

Sprinkle the blueberries into the filling, distributing them evenly.