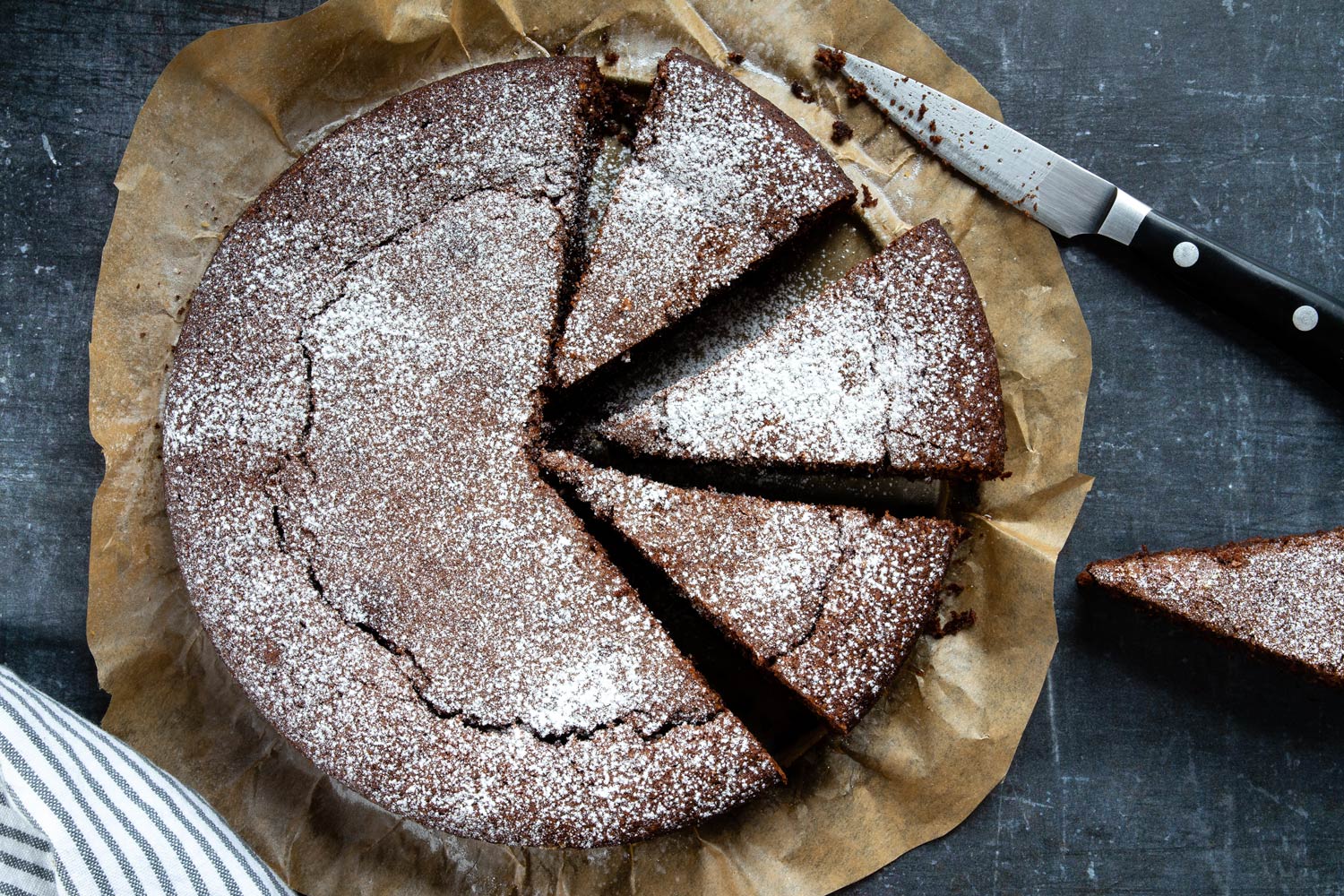 Torta Caprese is a flourless chocolate cake from the island of Capri. It has a thin hard shell and a rich interior flavored with almonds and Strega or rum. It’s usually dusted with powdered sugar or served with a generous portion of fresh whipped cream.

The texture for this cake comes from whipped egg whites that are gently folded through the chocolate batter to lighten it. While you ideally need a stand mixer or hand mixer for the egg whites, this recipe is relatively forgiving. You’ll still end up with a rich chocolate cake if you’re a bit heavy handed with the folding.

There are several stories about torta Caprese’s origin. One tale features an Austrian princess that was married to the King of Naples. She wanted the Sacher Cake famous back home, but the local chefs didn’t know the recipe and had to improvise, creating the torta Caprese. Another story claims that a local baker filling a tourist’s order for an almond cake forgot to add flour to the cake batter. The tourists loved the cake, declaring it “uno dei pasticci più fortunati della storia.” One of the most fortunate mistakes in history.

What we do know, is that the cake was first created on Capri primarily for tourists around the 1920s. It was likely served in tea rooms, and soon spread to restaurant and café menus across Naples.

Line a 8-inch (20cm) springform cake pan with parchment paper, grease the pan and parchment with butter and dust with flour. Tap out the excess flour and set aside.

Place a saucepan filled with an inch or two of water on the stove over medium-low heat.

In a medium bowl, combine the almond flour and salt.

In the bowl of a stand mixer, or in a large bowl with a hand mixer, cream the butter and sugar until light and fluffy, about 3 – 5 minutes. Pause and scrape the bowl a couple times to ensure even mixing.

Pour in the egg yolks and mix until combined and fluffy.

Pour in the melted chocolate:

Pour in the melted chocolate, all at once, and mix until thoroughly combined.

Pour in the rum:

Stir in the rum

With the mixer on low, gradually add in the almond flour and salt and mix until combined.

For this step, either use another clean bowl that fits the stand mixer, or transfer the batter to another bowl and clean the stand-mixer bowl really well. Any grease left on the bowl will compromise the ability to foam the egg whites. Using the whisk attachment, whip the egg whites to stiff peaks.

Carefully fold the beaten egg whites into the chocolate mixture until just combined.