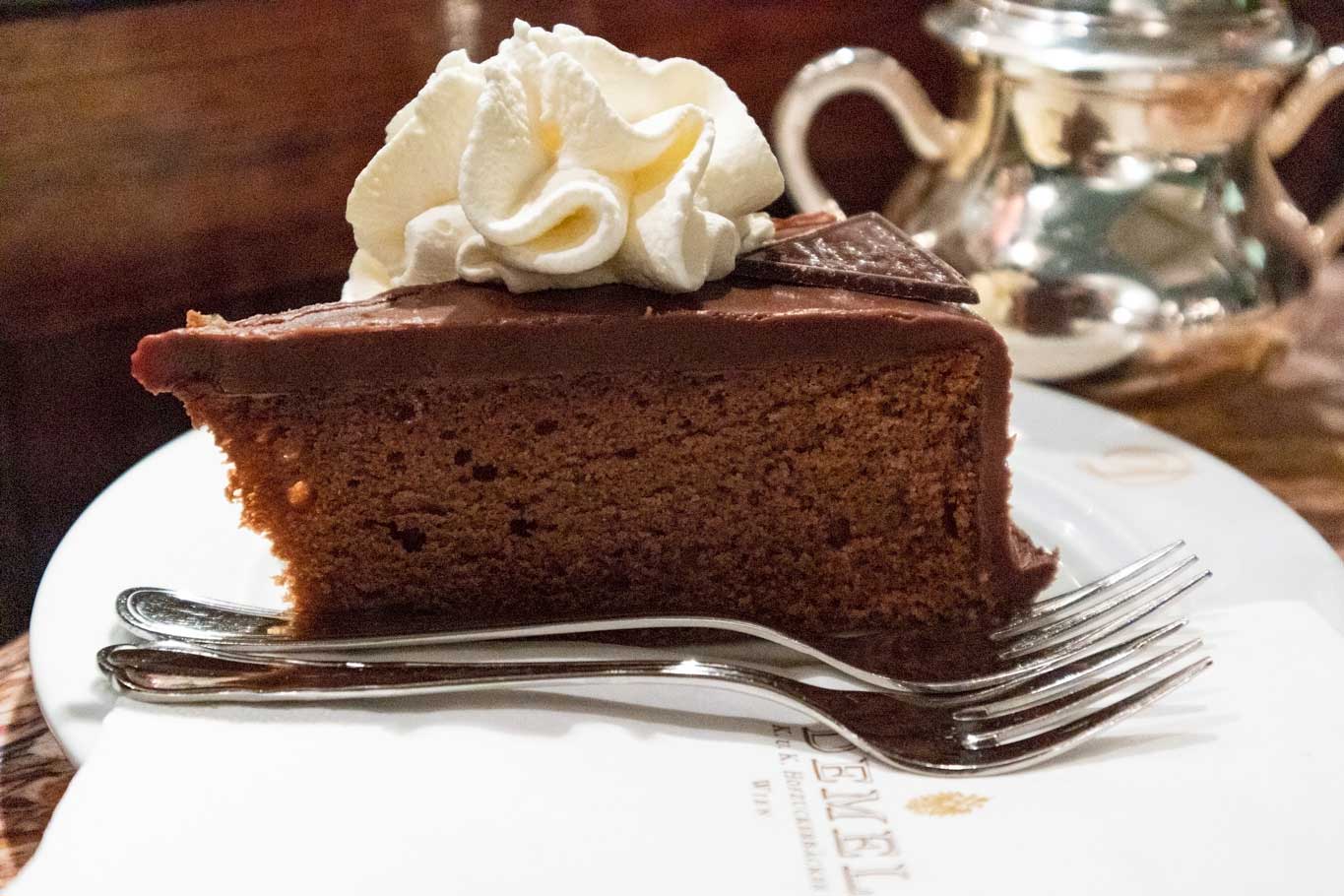 After winning the Battle of Vienna in 1683, Jerzy Franciszek Kulczycki pored over the spoils of the defeated Ottoman army and found the supplies to brew coffee. He opened the first café in Vienna and popularized adding milk and sugar to sweeten the bitter brew, now called a Mélange.

Or was it Johannes Theodat, who won the privilege of being the only seller of coffee for 20 years in gratitude for his services as a courier, who opened the first café in Vienna in 1685?

Whoever it was, coffee and cafés are so ubiquitously Viennese that their coffeehouse culture has been recognized by UNESCO. The typical Kaffeehaus is decorated with elegant architecture, and marble tables with newspapers strewn about. It is perfectly acceptable to spend hours at the café to read or chat, which with the extensive coffee options and fabulous cakes one would need the time to take it all in.

Of all the decadent cakes served in the coffeehouses of Vienna, none is more famous, or controversial, than the Sachertorte. Sachertorte is a fluffy chocolate sponge cake filled with apricot jam and covered with a thick layer of dark chocolate ganache. The tart jam contrasts perfectly the rich, bittersweet chocolate glaze. The mix of textures from spongy cake, dense ganache and sticky jam feel as sumptuous as strolling through the Innere Stadt.

The two most famous places to indulge in Sachertorte are Hotel Sacher and Demel. They are also where the controversy around the cake originates.

Sachertorte was created by Franz Sacher in 1832 for Prince Wenzel von Metternich to impress the prince’s dinner guests. While a success for the dinner, neither the cake nor Franz received any special attention.

Franz’s son Eduard followed his father’s footsteps and studied pastry and trained at Demel as well. During his time there, he perfected his father’s recipe into what we know it to be today. The modern version of the cake was first served to guests at Demel. Eduard later established Hotel Sacher in 1876 and continued to serve his cake.

The controversy lies in whether Demel or Hotel Sacher serve the Original Sacher Torte. Both can claim Eduard Sacher as the pastry chef who developed the cake. While Eduard established Hotel Sacher and brought the recipe with him, his son later worked for Demel when the hotel went bankrupt in 1934, bringing the rights to the recipe and distribution along with him.

When Hotel Sacher began selling “The Original Sacher Torte” under new ownership in 1938, the battle began between the hotel and Demel over the recipe and the name. It was during this clash that ingredients and characteristics such as how many layers of jam there are or the use of butter versus margarine were decided on to set the two apart.

So, which is better?

At Hotel Sacher, the cake is served at the Café Sacher and Sacher Eck. Café Sacher is beautiful, antique and filled with chandeliers and marble top tables. Sacher Eck is new and modern and fitted with elegant, red velvet booths. I tried the cake along with an Einspänner,  espresso served with whipped cream. The cake was split in two layers, with a thin spreading of apricot jam. The layer of ganache around the cake was thick and dense and seductively rich. Atop the ganache was a round chocolate coin stamped with “Hotel Sacher Wien.”

Demel was filled with ornate woodwork and patinaed floors. Walking past the store to the café in the back, one gets a view of the bakery and can watch the pastry chefs prepare the cakes and strudels. Here, I tried the cake with a traditional Franziskaner, espresso with steamed milk and whipped cream. The cake was a single layer, topped with a thin coating of apricot marmalade and topped with a shiny ganache. The cake was adorned with a triangle of chocolate printed with “Eduard Sacher Torte.”