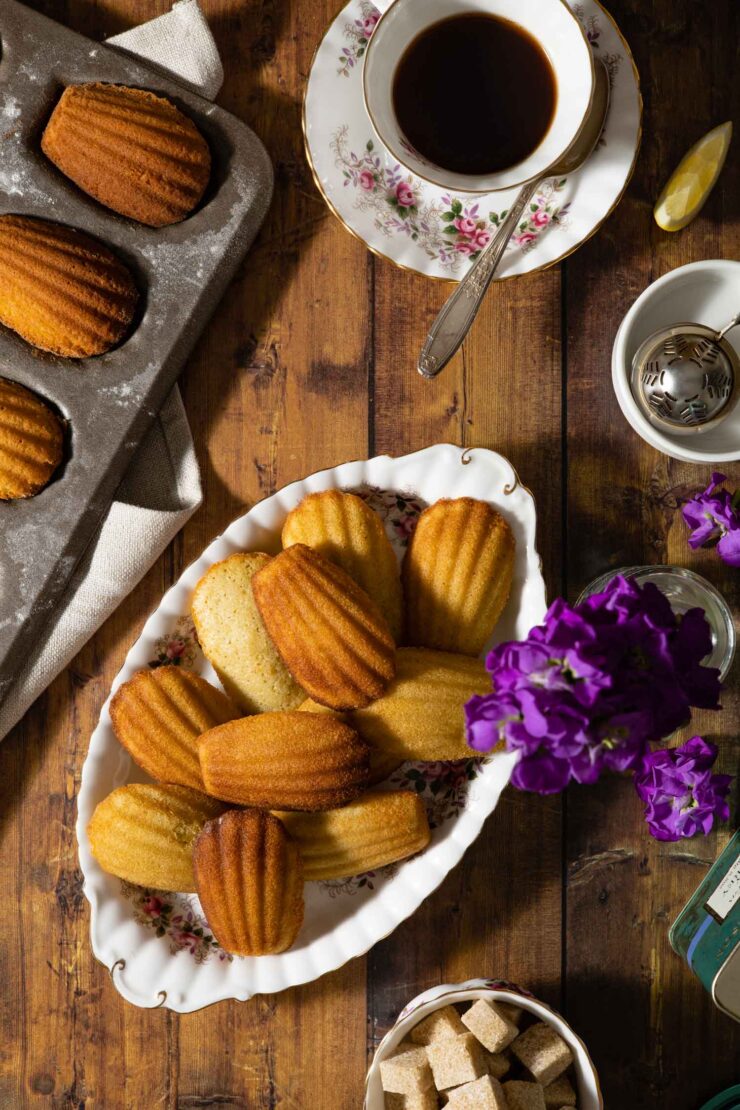 Madeleines are buttery and spongy miniature cakes baked in shell-shaped molds. While they’re a traditional tea-time treat in France, they are well-suited to any comforting beverage.

Traditional madeleines are made with beurre noisette, or brown butter, which has a toasty, nutty aroma. This recipe instead flavors the madeleines with Earl Grey tea by infusing the melted butter with tea leaves. To complement the bergamot in the tea, I’ve also flavored the madeleines with lemon zest and honey.

While these little tea cakes were celebrated in Proust’s “Remembrance of Things Past,” no one seems to remember the true origin of the madeleine. While there are a few legends around their creation, it’s likely that madeleines originate from Lorraine, France.

One of the legends claims that they were named after Madeleine Paulmier, who was a cook for Stanislaus I, the Duke of Lorraine, and exiled King of Poland. Stanislaus was throwing a grand dinner party in his castle when a dispute in the kitchen resulted in the chef leaving with the dessert. A young servant, Madeleine Paulmier, offered to make a cake based on her grandmother’s recipe. Rather than risk the mockery of his guests by not serving dessert, he accepted. The little cakes were such a success with the guests that they named the cake after her.

Another legend surrounds a pilgrimage to Santiago de Compostela, where a young pilgrim was given the recipe along the Camino de Santiago. This would explain why madeleines are shaped like shells, as the scallop shell is a symbol of the Camino.

Less romantic stories credit the invention of the madeleine to Jean Avice, the chef to Prince Talleyrand, or to the chef of Cardinal de Retz in the 17th century. Regardless of their true creator, the madeleine coincided with the increasing use of metal molds in European baking, along with canelés and molded aspics.

While Genoise does not often have much fat added to the batter apart from the yolk of the eggs, madeleines are made richer with the addition of butter. Here, I’ve opted to add zesty bitterness with Earl Grey tea, and some honey to add back some sweetness.

If you have time, rest the batter in the refrigerator for a few hours after mixing. Resting the batter hydrates the flour and thickens the batter, increasing the chances of producing the characteristic hump, or la bosse.

Be sure to grease the pan well, as the cakes tend to stick. Use a pastry brush to coat the molds with softened butter, then dust them with flour. For extra security, you can use a non-stick madeleine pan. When filling the madeleine molds, don’t fill them to the top. The batter spreads and rises during baking, so only fill the madeleine pans two-thirds or three-quarters full.

If you’re looking for more baking tips, you can download my guide here.

Madeleines are delicately structured cakes and stale quickly, so they’re best eaten the same day. But I doubt they will last long enough to stale anyway.

1. Infuse the butter with the tea:

Melt the butter and add the Earl Grey tea leaves. Let it steep for 10 minutes, then strain the butter through a fine mesh sieve lined with 2 layers of damp cheesecloth. Make sure to squeeze out as much of the flavored butter as possible.

In a medium bowl, whisk together the flour, baking powder and salt.

In the bowl of a stand mixer with a whisk attachment, beat the eggs and slowly pour in the sugar in a steady stream. Whisk the eggs and sugar on medium-high speed until thick, pale and tripled in volume, about 4 minutes.

To test if it is ready, let some of the mixture fall from the whisk. It should fall into the bowl in a ribbon that rests on the surface for about 10 seconds. You should be able to draw a figure eight.

Whisk in the vanilla extract, honey and lemon zest.

Sprinkle the flour mixture over the whipped egg mixture and very gently fold to combine. Stop as soon as it is incorporated.

5. Pour in the flavored butter:

Fold in the flavored butter, stopping as soon as it is incorporated.

Cover the batter with plastic wrap and let rest in the refrigerator for at least 3 hours and up to a day. While they can be baked right away, the texture improves by letting the batter chill if you have the time.

7. Fill the molds and bake:

Brush the madeleine molds with softened butter and sprinkle with flour. Tap out the excess flour.

Fill the molds 2/3 to 3/4 full, about a tablespoon. There should be just enough for 12 madeleines, or a little extra.

Bake the madeleines for 10 minutes, until they are golden.

Tap the pan sharply on a work surface to loosen the madeleines and turn out to cool on a rack.

Enjoy them warm or at room temperature. But hurry, they don’t last long.