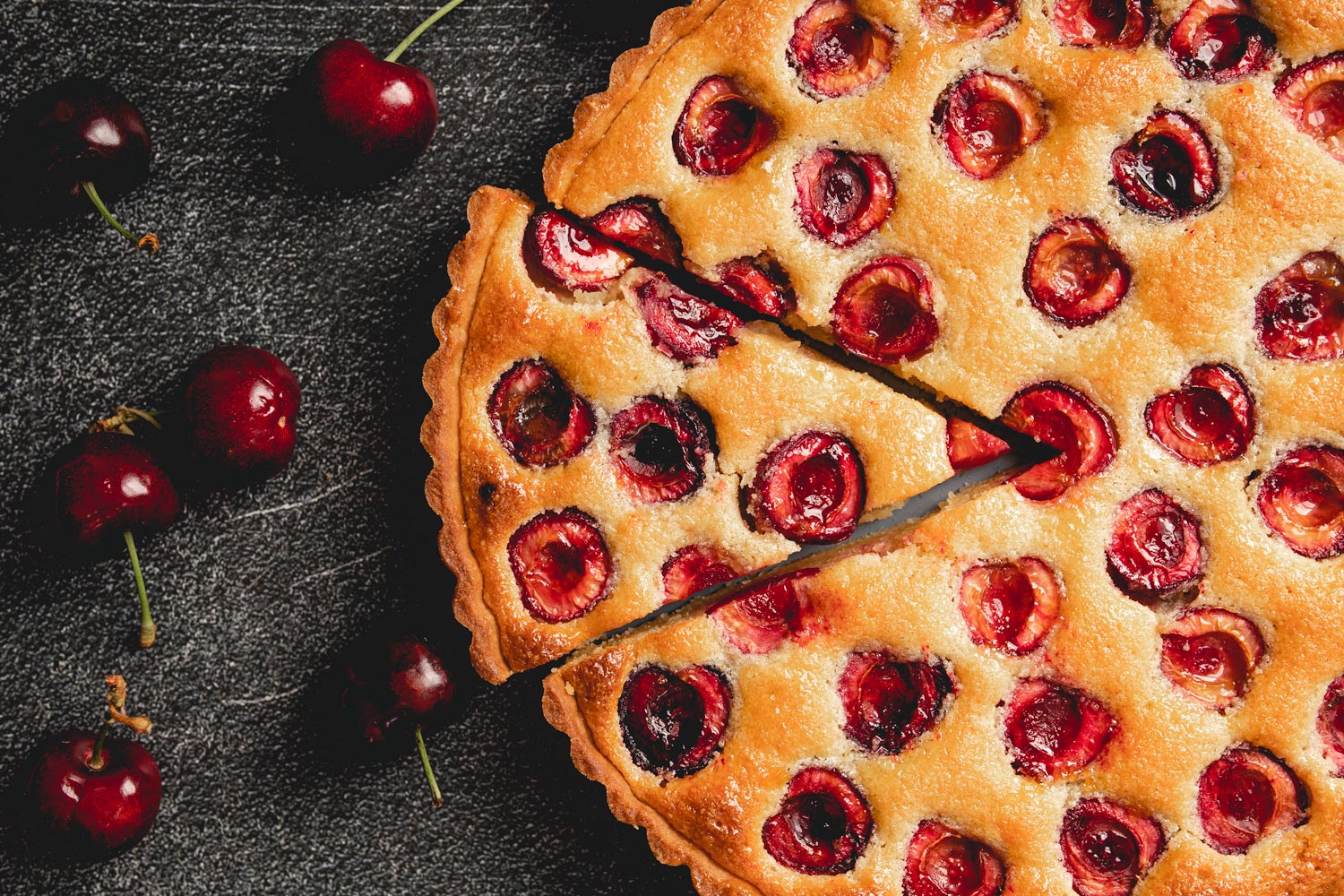 Cherries are just beginning to show up at the shops in my neighborhood and I love making tarts that show off fresh cherries. Frangipane provides a nice texture and complementary flavors to make the cherries shine. This tart is made with a crisp and buttery pâte sucrée base, filled with smooth almond cream, and topped with bright pitted cherries.

Frangipane is a pastry cream made with ground almonds, butter, sugar, eggs and a small amount of flour. It can be flavored with almond extract, rum or vanilla. Frangipane can also be adapted and made with other nuts instead of almonds, such as pistachios or hazelnuts. Frangipane is used in many classic pastries like pithivier, galette des rois, and as a filling for croissants.

The name comes from an Italian nobleman living in Paris in the 16th century, Marquis Muzio Frangipani, who invented a bitter-almond perfume for gloves. Legend has it that pastry chefs in Paris were inspired by the perfume and made an almond flavored pastry cream called frangipane.

Frangipane is a classic pairing with stone fruits, like peaches, plums, apricots, nectarines or cherries. Almonds aren’t actually nuts, they’re drupes: a fleshy fruit with thin skin and a stone in the center containing the seed. When almonds are growing on the tree, they look like small green peaches. As they ripen, their hulls split open revealing the stone. An almond is the seed inside the stone. This is one of the reasons almonds and stone fruits pair so well, because almonds are also stone fruits.

The pâte sucrée recipe here is the same as for the tarte au citron. The recipe makes enough for two 9-inch (23cm) tart shells. The extra can be stored in the refrigerator for a few days or in the freezer for up to two months.

Make sure all the ingredients for the frangipane are at room temperature before mixing. Frangipane relies on an emulsion of the fat in the butter and the liquids in the recipe. When the butter or eggs are cold, it will shock the butter. The butter will clump and separate from the rest of the ingredients, resulting in a broken frangipane.

If your frangipane does break, it’s not the end of the world and can be saved. To fix broken frangipane, warm the bottom of the bowl in another bowl of warm water or over a bain-maire on low. Let it warm up for about 30 seconds and begin to mix again. When the cold ingredients in the frangipane warm up enough, they will be able to emulsify properly.

When mixing the frangipane, avoid overmixing or mixing too vigorously. Beating too much air into the frangipane creates air bubbles that make the paste rise during baking. When cooling, the frangipane will then deflate and collapse.

Almonds absorb the most water of any nut because of their slightly lower fat content. Because of this, frangipane will stay moist for several days after baking. Almonds also have a milder flavor. This makes frangipane a great filling to highlight ripe summer fruits. The tart will be able to handle the extra water from the fruits because the almond filling will absorb the extra moisture. But some fruits, like strawberries, will release too much liquid. Just to be sure, place the cherries skin-side down in the filling to reduce the amount of moisture that runs into the frangipane.

Combine the butter and sugar:

In the bowl of a stand mixer with the paddle attachment, or in a large bowl with a rubber spatula, combine the butter and icing sugar and mix until smooth.

Try to work quickly to prevent the dough from warming up. As it warms up it sticks easier and can become hard to work with.

Unwrap the dough, dust it with flour, and place it on a lightly floured surface. Roll to 1/8 inch (3mm) thick, rolling from the center outward in all directions. Lift and rotate a bit after every few strokes and dust with flour as needed to discourage sticking.

Carefully transfer the dough into the tart pan. Gently press the dough into place without stretching the dough or the sides will shrink while it bakes. Roll the rolling pin over the top to trim the edges. Prick the base all over with a fork and place in the refrigerator or freezer for 30 minutes while preparing the frangipane.

In a medium bowl, sift together the almond flour, icing sugar and flour.

In the bowl of a stand mixer fitted with the paddle, or in a large bowl with a rubber spatula, combine the butter, salt and vanilla extract.

Gradually add the beaten egg and continue to mix until it is incorporated.

Add the rum and mix until incorporated.

Transfer the frangipane into the tart shell and spread evenly with an offset spatula.

Press in the cherries:

Arrange the cherries in a decorative pattern and press them into the batter. Place them skin side down to reduce the amount of moisture that leaks into the frangipane.

Bake the tart for 40 minutes at 175°C (350°F). The crust and the frangipane should be golden brown and a knife or wooden skewer should come out clean when inserted.

While the tart is cooling, combine the apricot jam and water in a small saucepan and bring to a simmer over medium heat. Once it comes to a simmer take off the heat.

Use a pastry brush to apply a thin coat of the apricot glaze to the tart.

Let the tart cool completely and serve at room temperature. The tart should keep for up to 3 days in the refrigerator.