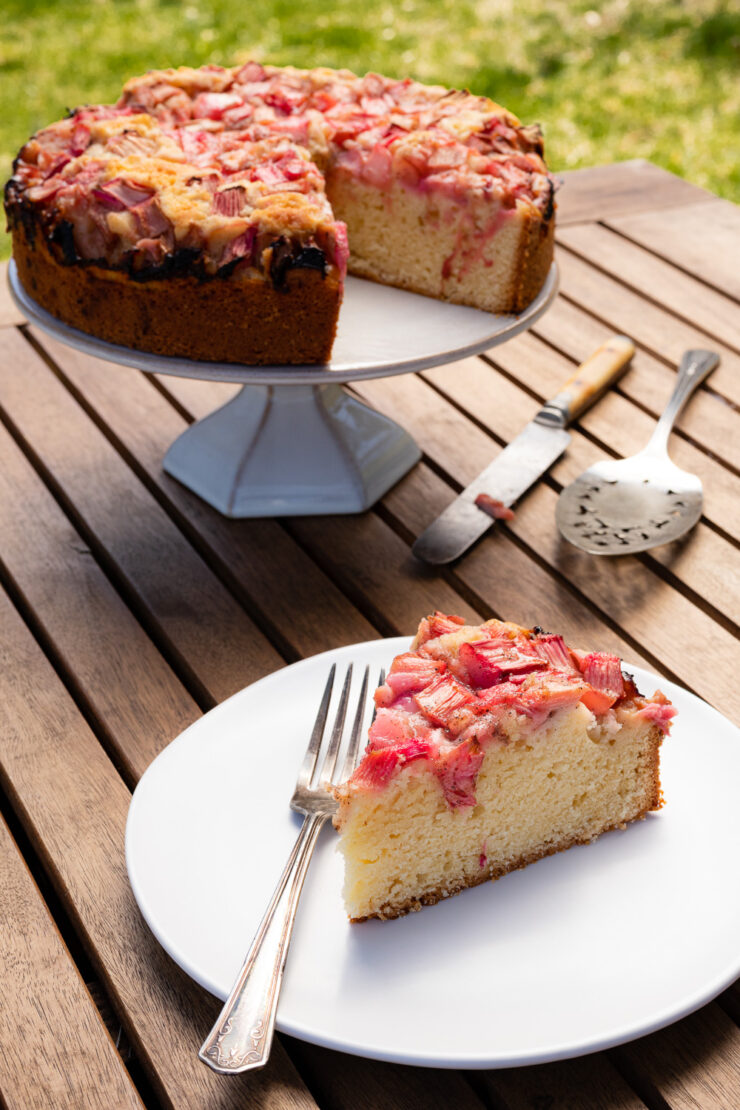 What better way to celebrate spring than to bake a rhubarb cake. This beautifully rustic cake is quick to make and ready to serve in just over an hour. It has a soft crumb just strong enough to support the lemon-tart-tang of the fresh rhubarb topping. The rhubarb is tamed with a small amount of sugar and fragrant cardamom.

This is an easy rhubarb cake so you can quickly savor the moment the crimson stalks are long enough to harvest. Remember to twist and pull the stalks of the plant, don’t cut them. When the cake is ready, take a slice outside with a cup of hot coffee to warm you up enough for the fresh spring air.

The Culinary History of Rhubarb

In the US, rhubarb is deemed the “pie plant,” but its long history shows that it’s much more than just a filler for pie.

Rhubarb is a perennial plant and one of the first harvests of spring. It thrives in a cool, northern climate, which is why it’s become a staple of spring Scandinavian recipes. The leaves aren’t edible, but the pink and green stalks are popular for their tart zing.

While its origin is not entirely known, it seems that rhubarb was originally cultivated in China. The plant was an important herb in traditional Chinese medicine. During the medieval spice trade, it made its way to Europe and was one of the most expensive goods traded on the Silk Road. It was valued higher than saffron.

By the 18th century rhubarb was grown in the cool climates of Scandinavia and Great Britain. It wasn’t until the industrialization of sugar in the 19th century that rhubarb began to enter the kitchen. Once sour rhubarb could be affordably placated with sugar, it quickly made its way into spring cakes and pies.

Preheat the oven to 175°C (350°F). Butter the bottom of a 9-inch (24cm) springform pan, line it with parchment paper, then butter and flour the parchment paper and sides of the pan.

2. Whisk together the flour, baking powder, and salt:

Whisk together the flour, baking powder, and salt in a mixing bowl and set aside.

In the bowl of a stand mixer with the whisk attachment, or a large bowl with a hand mixer, whip the eggs and sugar on medium-high speed until the mixture becomes pale yellow and expands 3 to 4 times the original volume.

4. Fold in the flour mixture:

Using a large rubber spatula, gently fold the flour mixture into the beaten eggs. Whipping the eggs and sugar builds a fragile aerated structure, by working carefully you prevent losing too much volume.

Fold the melted butter, milk, and vanilla extract into the batter, again working quickly but gently to preserve as much volume as possible. Stop mixing as soon as it’s combined.

Toss the sliced rhubarb with the sugar and cardamom in a mixing bowl.

Pour the batter into the prepared pan and distribute the rhubarb evenly over the top. Bake in the preheated oven at for 35 to 40 minutes, or until a skewer inserted in the center of the cake comes out clean.