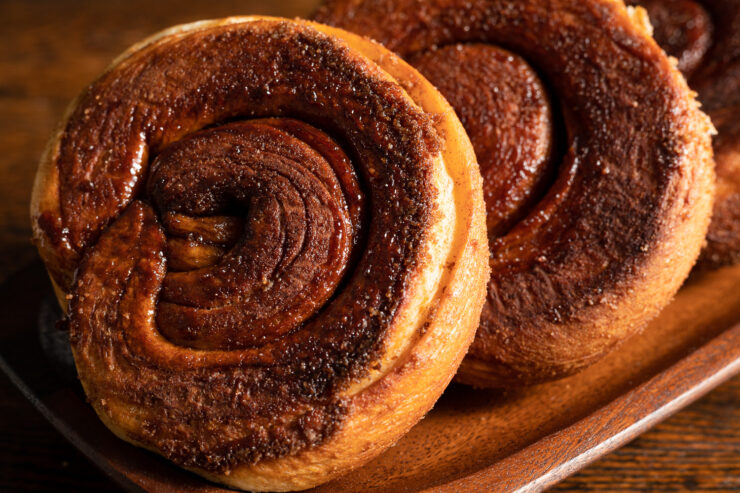 Zeeuwse bolussen, or Zeeland rolls, are the Dutch version of cinnamon rolls. Zeeuwse bolussen are not made like most cinnamon rolls: rolling the dough out, filling, and slicing. Instead, the dough is divided and rolled into individual ropes, pressing the cinnamon sugar into the ropes while forming them and then spiraling them into shape.

Zeeuwse bolussen are found everywhere in the Netherlands, but they are named for the province from which they originate, Zeeland. Zeeland, literally “Sea Land,” is located in the southwest of the country and, as the name might suggests, consists of several islands jetting into the North Sea.

Zeeuwse bolussen are a Dutch Jewish pastry created in the 17th century. It’s thought that the bolus was developed from pastries originally crafted by the Portuguese Jewish community that settled in the region.

In the bowl of a stand mixer fitted with the dough hook, mix the yeast and warm milk together and set aside while weighing the other ingredients. The yeast should start to foam after a few minutes, otherwise the yeast might be dead.

Add the sugar, egg, and butter to the milk and yeast. Set the mixer on medium for a few seconds to combine.

Add in the flour:

Add in the flour and salt, and slowly work the mixer up to medium speed. Knead until everything combines, forming a dough.

Knead the dough until it is smooth and elastic, approximately 6 minutes.

Cover the bowl with plastic wrap or a damp tea towel and set in a warm place to rise for 1 hour, or until doubled in size.

Mix together the brown sugar and cinnamon. Spread the mixture on your work surface, or in a large, rimmed baking sheet if you prefer to keep things neat.

Divide the dough into 12 equal pieces and place in the brown sugar mixture.

Working one at a time, use your palms to roll out each piece into a 12-inch (30cm) rope, coating them in the brown sugar.

Curl the strips of dough into spirals and tuck the end underneath. Make sure they’re well coated in sugar and cinnamon.

Place the rolls onto a parchment-lined baking sheet. Cover with plastic or a tea towel and let them proof at room temperature for 1 hour, or until doubled in size. When you poke the dough with your finger, the dough should spring back slowly and leave an indentation. If it springs back right away, the dough is not ready yet and should proof longer.

Optional: Place a small baking dish filled with water on the bottom shelf of the oven.

Bake the rolls until golden brown and the bottoms are caramelized, about 10 minutes.

Remove from the oven and cover the rolls with a piece of parchment paper. Place another baking sheet on top and flip the whole thing over so the rolls are upside-down on the baking tray.