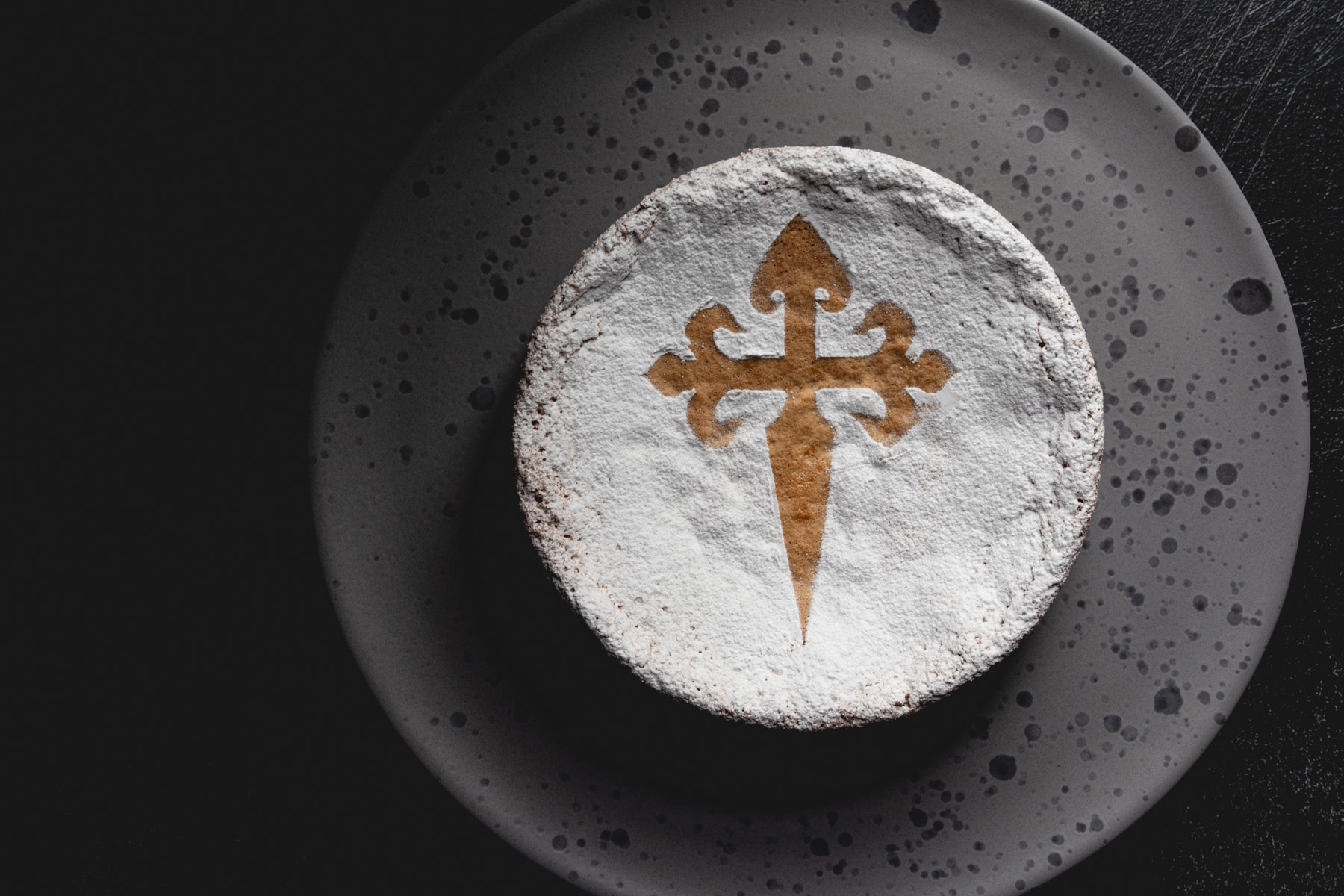 The history of this cake might just be as rich and dense as the cake itself. Tarta de Santiago, or St. James Cake, is an almond cake from Galicia with its origins in the Middle Ages. The cake is a simple base of almonds, sugar and eggs, usually flavored with cinnamon and lemon zest. Tarta de Santiago is traditionally served after lunch with a relaxing cup of café con leche.

The cake can be found in nearly all of the pastry shops in the countless towns along the Camino de Santiago, or Way of St. James. It’s easy to identify it as it’s almost always adorned with powdered sugar with an imprint of the Cross of St. James, also known as the Cruz de Santiago.

The earliest visits to the Cathedral of Santiago de Compostela date back to the 9th century and  it became one of the most popular pilgrimages in Medieval times. Those who completed the journey would bring a Galician scallop shell home with them as proof of their expedition.

Another interesting note about the Camino’s scallop shell is that it might be the reason that madeleines are shaped the way they are.

The Order of Santiago was a religious and military order established in the 12th century to protect the pilgrims of the Camino. The order adopted the Cruz de Santiago or Cruz Espada as their emblem, a design that dates back to 844. The Cruz Espada is so named for mixing a decorative cross with a cross fitchy, where the lower limb is pointed like a sword.

The Origins of Tarta de Santiago

The specific origins of Tarta de Santiago are difficult to determine. A very similar cake called tarta real (royal cake) can be traced to bishop Pedro Portocarrero’s visit to the Universidad de Santiago in 1577.

The earliest written recipe with similar proportions to today’s cake appeared in notes by Luis Bartolomé de Leybar in 1838 under the name vizcocho de almendra. The recipe was included in his “Cuaderno de confitería” which is currently in a collection of manuscripts at the Xeral Library at the University of Santiago de Compostela.

Decorating the cake with the Cross of St. James can be traced back to Casa Mora in 1924 in Santiago de Compostela. It quickly caught on in other pastry shops, and would be hard to find it without the cross today.

How to Make Tarta de Santiago

The EU has designated PGI status to Tarta de Santiago, and as such it is a protected food name with specific requirements in order to use the term. For a cake to officially be called Tarta de Santiago, it must be made in the Autonomous Community of Galicia and contain at least 33% almonds, 33% sugar and 25% egg. This means that apart from making it in Galicia, creating the recipe is rather simple.

I’ve chosen equal parts by weight of almonds, sugar and eggs. The eggs are first beaten with the sugar until pale and thick, and then the almond flour and flavorings are gently folded in. I flavor the cake with cinnamon and lemon zest. If you can find it, you can also add a splash of aguardiente de hierbas, some brandy, or leave it out.

In a medium bowl, whisk together the almond meal, lemon zest, cinnamon and salt.

Beat the eggs and sugar:

In the bowl of a stand mixer with the whisk attachment, or in a large bowl with a handmixer, beat the eggs on medium-high while gradually pouring in the sugar. Beat until the egg mixture becomes pale, foamy and thick, about 3-5 minutes. Pour in the aguardiente (if using).

Using a wide rubber spatula, gently fold in the dry ingredients until combined.

Transfer the cake batter into the prepared cake tin and bake at 175°C (350°F) until the cake is golden and skewer comes out clean when inserted into the center of the cake, about 30-35 minutes.

Let the cake cool before removing from the tin.

Dust the top of the cake with powdered sugar.

If you wish, you can create a stencil of the Cross of St. James and place it on the cake before dusting with sugar.