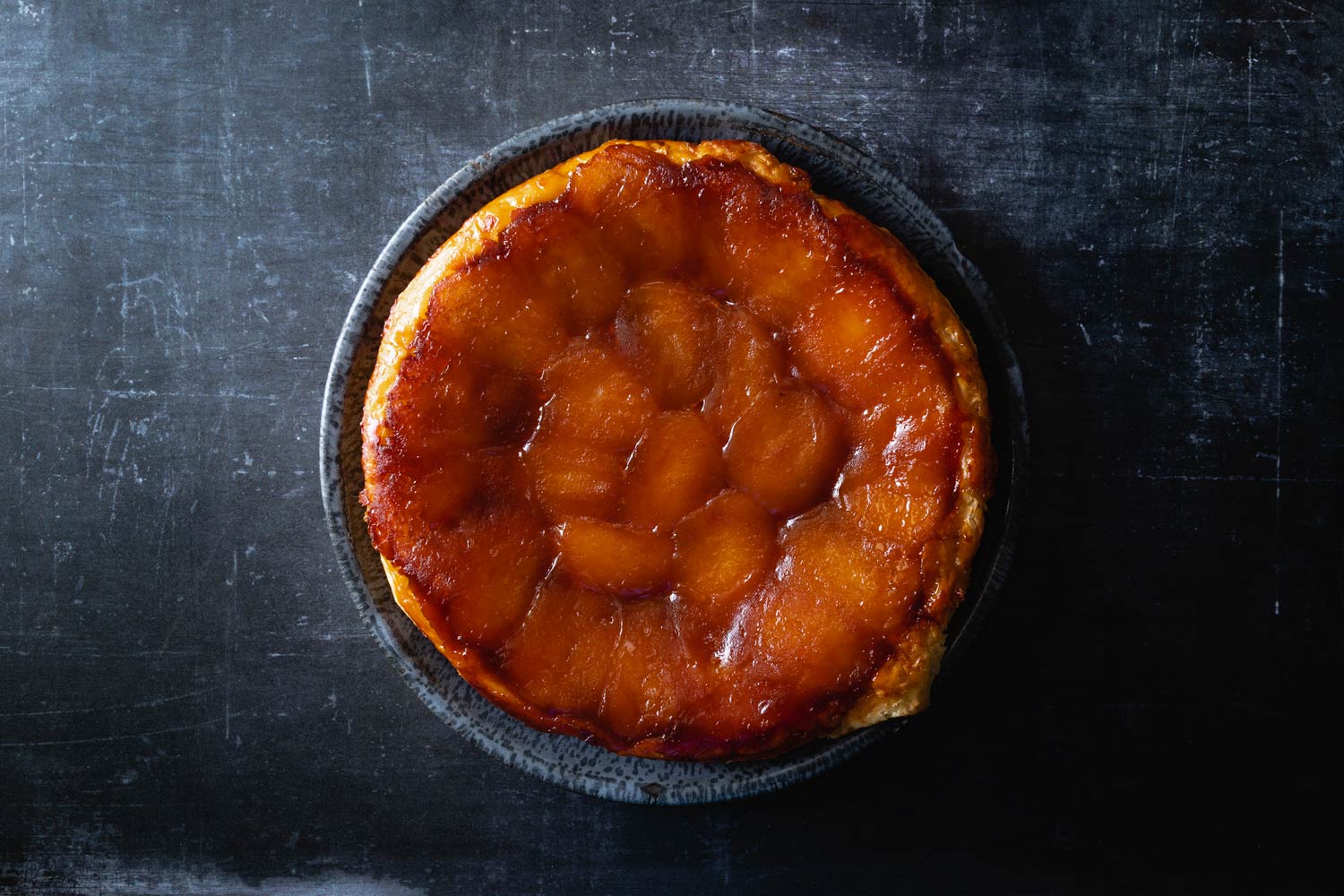 Tarte Tatin is a delicious caramelized apple tart that is at once rustic and Parisian chic. Apples are caramelized in butter and sugar on the stove, topped with pastry, and finished in the oven. To serve, the tart is flipped out of the pan directly onto the serving dish. This classic French tart requires much less effort than your lucky guests would glean.

The tarte Tatin is named after the sisters, Stéphanie and Caroline, who invented it in the 1880s at their hotel in Lamotte-Beuvron, Loir-et-Cher. Stéphanie, who usually did most of the cooking, created the tart one day when she was overwhelmed with work. She was making an apple pie, but accidentally cooked the apples in the butter and sugar for too long. Trying to salvage the pie, she topped the apples with a thin layer of pastry directly in the pan and quickly cooked the pastry with overhead heat. She inverted the tart onto a platter and served it to guests who were, to her surprise, wholly satisfied.

No one really knows if this legend is true or not, but upside down tarts weren’t actually new at the time. The famous pastry chef and author Antonin Carême included ‘gâteaux renversés with apples’ in his Pâtissier Royal Perisien, published well before the Tatin sisters opened the hotel. The region was already well known for the tarte solognote, a very similar upside down apple tart.

What we do know, is that the Tatin sisters made it famous. Local guides praised the tart in their reviews, and Curnonsky, a renowned author and epicure, included ‘The Famous Apple or Pear Tarte from the Demoiselles Tatin of La Motte-Beuvron’ in the 1926 volume of La France Gastronomique.

The tart soared in popularity in the late 1930’s after Louis Vaudable listed the ‘tarte des demoiselles Tatin’ on the menu at his famous Parisian restaurant, Maxim’s. The tart quickly made it onto the menus of other fashionable restaurants around the city, and is now a recognized classic worldwide.

While the Tatin sisters never published a recipe in their lifetime, a few versions of the recipe have emerged from their friends and neighbors. One such recipe comes from the sisters’ friend, Marie Souchon. From the ingredients listed, it’s a simple tart: only butter, sugar, apples, and a dough made of flour, butter, and water. The tart starts by cooking the apples in butter and sugar, before covering the apples with a thin layer of flaky, unsweetened dough. Once the dough is cooked through and the apples are caramelized, the tart is inverted onto the serving dish. The tart isn’t flavored with any spices or flavorings, and it’s served warm, confidently ungarnished.

In my recipe below, I’ve tried to mostly stay loyal to the tart’s unembellished origins. The apples are caramelized simply in butter and sugar, no vanilla or cinnamon. It seems that the original recipe uses pâte brisée rather than puff pastry, but I couldn’t resist using the same quick puff pastry from last week’s appelflappen recipe. The dough is rich, crisp, and especially flaky for much less effort than traditional puff pastry. Though, you can just buy a sheet of puff from the store if you want to simplify the endeavor.

Slice and chill the butter:

Combine the water and vinegar:

Combine the water and vinegar and keep in the refrigerator until ready to use.

In a large bowl, whisk together the flour and salt.

Add the cold butter, stirring to coat each slice with flour so they don’t stick together.

Pour in the water and vinegar:

Slowly pour in the water and vinegar mixture and stir with a rubber spatula or fork until the dough starts to come together. Pour the dough out onto your work surface and gently knead just until the dough forms a cohesive ball.

Shape the ball of dough into a disk, wrap in plastic, and chill in the refrigerator for at least 30 minutes.

Take the dough out of the refrigerator and set aside the plastic wrap.

Lightly dust a large work surface and the dough with flour.

Fold the top third of the dough over the middle of the dough. Then fold the bottom third over the top, like folding a letter.

This process is called a single turn.

Rotate the dough 90 degrees so the seam is facing you.

Repeat the steps for the first turn. Make sure to lightly dust with flour anytime the dough starts to stick to the work surface.

Chill and rest the dough (optional):

At this point, if the dough is starting to warm up and stick, or if it resists you when rolling it out, you can wrap the dough back in plastic and let it rest in the refrigerator for 30 minutes.

Complete the third and fourth turns:

Complete two more single turns. Wrap the dough in plastic and let it rest in the refrigerator for 30 minutes. After resting, the dough is ready to use.

Note: This is enough puff pastry for 2 tarts. The unbaked puff pastry can keep in the refrigerator, well-wrapped, for 2-3 days, or frozen for up to 1 month.

Roll out the pastry:

If you’re making one tarte Tatin, divide the pastry in two, and continue with half the pastry (about 300g).

Lightly dust a work surface with flour. Use a rolling pin to roll out the puff pastry into a 10-inch (25cm) circle, about 1/8-inch (3mm) thick. Reserve in the refrigerator until ready to use.

Peel, quarter and core the apples.

In a 10-inch (25cm) non-stick skillet, melt the butter over medium heat. Add the sugar and continue to cook over medium heat until it turns a deep caramel color, about 5-7 minutes.

Take the skillet off the heat and arrange the apple quarters in a spiral pattern, working from the rim of the pan inwards to the center. Place the skillet back on the heat.

Cover the skillet and cook for 15 minutes, until the apples have softened and the caramel has thickened.

Remove the cover and take the pan off the heat. Cover the apples with the sheet of puff pastry. Tuck in the sides and make sure the pastry hugs the apples snugly. With a small, sharp knife, poke a few vents into the pastry.

Cool and invert the tart:

Let the tart cool for 10 minutes. Cover the tart with a large plate and carefully invert the tart onto the serving dish. Serve warm.

Tarte Tatin is best eaten the same day. The puff pastry loses some of its crispiness the next day.