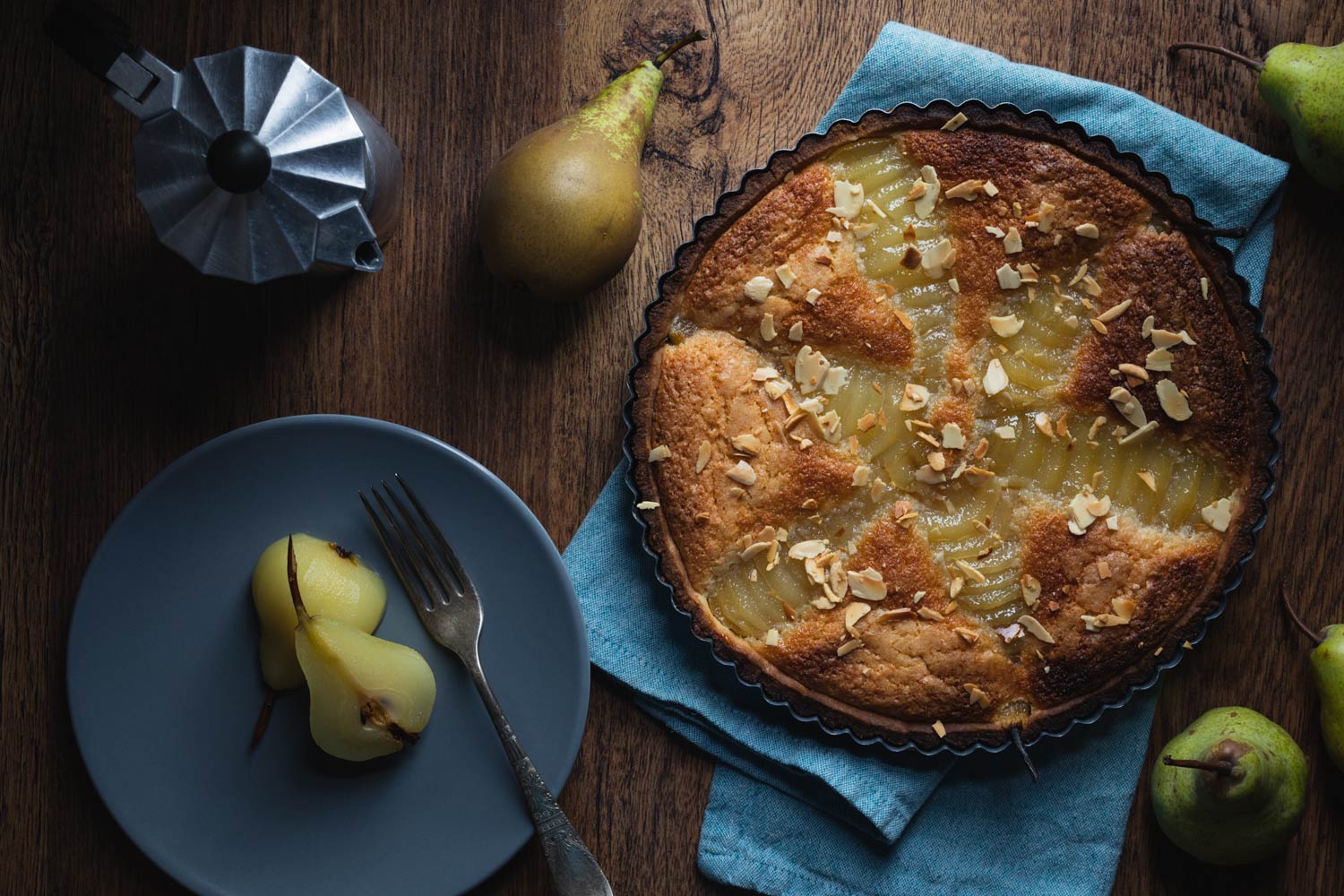 The Bourdaloue tart was invented in the early 1900s by the famous pastry chef, Coquelin, at La Patisserie Bourdaloue in the Quartier de l’Opéra in Paris. The tart traditionally features poached pears, an almond cream (either frangipane or an almond custard), and is covered in crumbled macarons.

Fill a pot with water:

Pour 1 liter of water into a medium saucepan and toss in the lemon wedges.

Peel the pears and slice them in half lengthwise, leaving the stems attached. Place the pears in the lemon water so they don’t oxidate and turn brown.

Add the rest of the ingredients:

Pour the sugar in the pot and add the vanilla extract, cinnamon, and cloves.

Bring to a simmer:

Set the saucepan on the stove and bring to a simmer over medium heat.

Once the pears have come to a simmer, place a small plate in the pot to keep the pears submerged in the poaching liquid. Turn the heat down to low and continue to simmer until the pears are tender and knife pierces them easily, about 12 minutes.

Remove the saucepan from the heat and let the pears cool in the syrup.

Combine the butter and sugar:

In the bowl of a stand mixer with the paddle attachment, or in a large bowl with a rubber spatula, combine the butter and icing sugar and mix until smooth.

Try to work quickly to prevent the dough from warming up. As it warms up it sticks easier and can become hard to work with.

Unwrap the dough, dust it with flour, and place it on a lightly floured surface. Roll to 1/8 inch (3mm) thick, rolling from the center outward in all directions. Lift and rotate a bit after every few strokes and dust with flour as needed to discourage sticking.

Carefully transfer the dough into the tart pan. Gently press the dough into place without stretching the dough or the sides will shrink while it bakes. Roll the rolling pin over the top to trim the edges. Prick the base all over with a fork and place in the refrigerator or freezer for 30 minutes while preparing the frangipane.

In a medium bowl, sift together the almond flour, icing sugar and flour.

In the bowl of a stand mixer fitted with the paddle, or in a large bowl with a rubber spatula, combine the butter, salt and vanilla extract.

Gradually add the beaten egg and continue to mix until it is incorporated.

Add the rum and mix until incorporated.

Transfer the frangipane into the tart shell and spread evenly with an offset spatula.

Remove the pears from the poaching liquid and blot dry. Remove the cores and the inside portion of the stem. Slice each pear half horizontally in thin slices.

Arrange the sliced pear halves on the frangipane filling, fanning them slightly, flat-side down, alternating them stem-end up and stem-end down.

Bake the tart for 35-40 minutes at 190°C (375°F). The crust and the frangipane should be golden brown and a knife or wooden skewer should come out clean when inserted.

While the tart is cooling, combine the apricot jam and water in a small saucepan and bring to a simmer over medium heat. Once it comes to a simmer take off the heat.

Use a pastry brush to apply a thin coat of the apricot glaze to the tart.

Let the tart cool completely and serve at room temperature. The tart should keep for up to 3 days in the refrigerator.