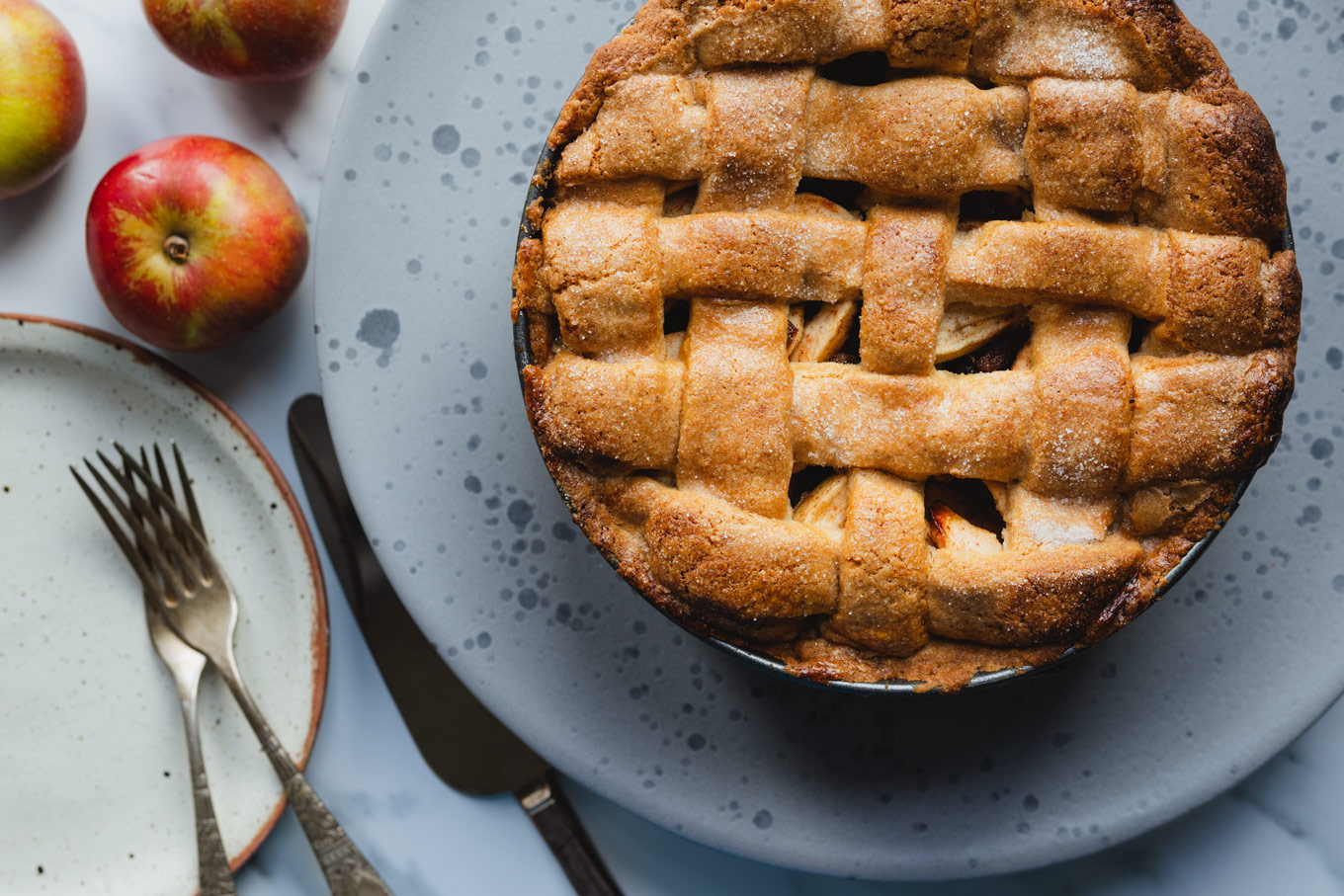 You can probably tell from all the Dutch recipes I’ve posted, that I’m a fan of Dutch baking. And of all Dutch desserts, the classic appeltaart may be the most famous. Appeltaart is a tall Dutch apple pie made from a brown sugar shortcrust pastry filled to the brim with cinnamon apples.

Appeltaart is best translated as Dutch apple pie, and not to be confused with Dutch apple tart, which would be appelvlaai. Whereas appelvlaai is a specialty of the south, appeltaart is a staple in all of the Netherlands.

While the saying may be “as American as apple pie,” an appeltaart recipe appears in the first Dutch cookbook 100 years before the first colony at Jamestown. The recipe in Een notabel boecxken van cokeryen isn’t much different from how it’s made today. Most recipes today include cinnamon, but the 1514 recipe suggests including a spice mix of cardamom, ginger, cinnamon, nutmeg, clove, and mace “if you want to make a very fine tart.” This would also have made it lavishly expensive.

If you’ve ever been to the Netherlands, you’ll know that it’s hard to find a place that doesn’t serve apple pie for dessert. There’s nothing more Dutch than a kopje koffie and a slice of appeltaart with a generous dollop of whipped cream.

For the Apple Filling:

For the Egg Wash:

In a large bowl, whisk together the flour, brown sugar, salt, and baking powder.

Add the egg and gently knead the dough until it comes together into a ball.

Wrap the dough in plastic and let it rest in the refrigerator for at least an hour before rolling it out. I prefer to make the dough the day before and have it rest overnight.

For the Apple Filling

Place the raisins in a heatproof bowl and cover them with boiling water. Let the raisins soak for 10-15 minutes, then drain.

Peel and core the apples, then slice them thinly. In a large bowl, toss the apples in the lemon juice, coating them so they don’t oxidize.

Add the sugar and cinnamon to the apples and stir to distribute evenly. Then stir in the raisins.

Split the dough into two pieces, one slightly larger than the other.

Start with the larger ball of dough and keep the smaller one cold in the refrigerator.

Roll out the larger piece of dough and line the bottom of the cake pan as well as up the sides.

Sprinkle the breadcrumbs into the bottom of the pie shell, then pour in the apple filling. Press the filling in snugly. It will seem like there’s too many apples, but the filling will reduce as it bakes.

Trim and seal the edges:

Using your fingertips, seal the edge of the pie and trim off any excess dough.

Brush the lattice with a beaten egg and sprinkle generously with granulated sugar.

Bake the appeltaart for 60-70 minutes until the crust turns rich, golden brown and the apples are tender.

Let the pie cool to room temperature before serving.

To unmold the pie, carefully run a knife or offset spatula along the edge to ensure the crust isn’t sticking, then release the pan.

Leave a Reply to the Sunday Baker Cancel reply