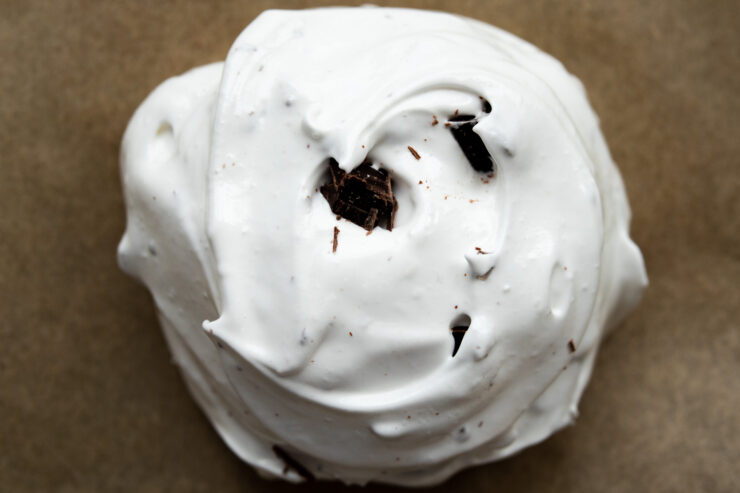 Classic and simple, French meringue makes cloud-like cookies and desserts. With a crisp shell, and a chewy, marshmallow-like center, baked meringue is a sweet medley of textures.

Meringue is a versatile base for all sorts of flavorings and add-ins. Once you know how to whip French meringue, you can make it your own by adding chocolate chips, nuts, or jam.

What is French Meringue?

French meringue is tender, light and fragile. It’s the best meringue to use for cookies, dessert shells, mixing with nuts, or as a leavening agent in batters.

French meringue is the simplest method, but also the least stable. In this type of meringue, granulated sugar is gradually added directly to the whipping egg whites. It is generally not eaten raw and must be cooked.

French meringue can be baked plain, as in the recipe below, but it’s also the base for these French macarons and these Italian brutti ma buoni cookies.

The origin of meringue is not entirely known. It’s believed that meringue originates in the Swiss town of Meiringen and then improved upon by the Italian chef Gasparini in the late 17th century.

The first recipe titled meringue appeared in print in a French cookbook by François Massialot in 1692. But the earliest written recipe for meringue is thought to be a handwritten recipe for “white bisket bread” by Lady Elinor Fettiplace from Oxfordshire dated 1604.

What are the Different Types of Meringue?

There are three different types of meringue: French, Italian, and Swiss. The ingredients for all three are essentially the same, but the preparation method and results are different.

Italian meringue is made by beating a hot sugar syrup into the whipping egg whites. The hot syrup partially cooks the egg whites making it more stable and allows the meringue to hold up longer than French or Swiss meringue. Italian meringue is used for desserts where the meringue is eaten without cooking, usually as a filling or a topping. It’s the type of meringue you would use for a lemon tart and it’s also the base for making turrón.

Meringue can be made with just two basic ingredients: egg whites and sugar. But other ingredients may be added to stabilize or flavor the meringue.

Egg whites have excellent foaming ability and can increase in volume by up to 8 times. There are two main proteins in egg whites that ensure they foam well: albumin and ovalbumin. When egg whites are beaten, the albumin creates a stable structure to capture air bubbles as well as hold moisture in place. The ovalbumin takes over when the meringue is cooked and prevents it from collapsing as the water evaporates and the albumin denatures.

To get maximum volume and expansion, use fresh, room-temperature egg whites and ensure the bowl and whisk are clean of any grease.

Sugar helps stabilize the foam and adds flavor. During mixing, the sugar actually delays the foaming process, but adds stability during baking. It’s best to start whipping the egg whites without sugar to begin foaming, then gradually mix in the sugar. The amount of sugar depends on the desired texture and use of the meringue. Generally speaking, the harder the meringue, the higher the sugar content.

It is entirely possible to make meringue without cream of tartar. It’s not necessary, but adding a little bit of acid, either from cream of tartar (tartaric acid) or a few drops of lemon juice, helps to stabilize the meringue. Increasing the acidity of the egg whites makes the foam less likely to collapse.

You don’t want to add too much though, as it could change the flavor of the meringue or prevent it from cooking properly in the oven.

French meringue can be used to make cookies, or as a base for other recipes. I like to bake large, rustic mounds that make chewy meringues that have a crisp, fragile exterior. They can be baked plain, or mixed with chopped nuts, chocolate chips, or swirled with jam.

Arrange the oven racks to the lower third and upper third of the oven. Preheat the oven to 120°C (250°F). Line two baking trays with parchment paper.

Add the egg whites and cream of tartar to the bowl of a stand mixer fitted with the whisk attachment, or a large mixing bowl if using a hand mixer. Whip the egg whites on high speed until thick and foamy, about 1 to 2 minutes.

Continuing to whip at high speed, gradually add the sugar; this should take about 3 minutes.

4. Whisk in the vanilla extract:

Pour in the vanilla extract and continue to whip the meringue.

Continue to whip the meringue until stiff peaks form, about 5 minutes more.

When you pull the whisk out of the bowl, the peak should stand up straight. The meringue should be smooth and glossy. If you rub a bit of meringue between your fingers, it should feel smooth, meaning the sugar has fully dissolved.

Using a wide rubber spatula, gently fold in your desired mix-ins, if using, until evenly distributed.

Meringues won’t spread while they bake, but be sure to leave some room for even baking.

After scooping, drizzle each meringue with 1 to 2 teaspoons of jam. Use a small offset spatula to swirl the jam into the meringue.

The outside should be crisp and dry, but the center will be soft and chewy, almost like marshmallow.

Allow the meringues to cool completely on the baking sheet before removing them gently.

Meringues will last up to 4 days in an airtight container.